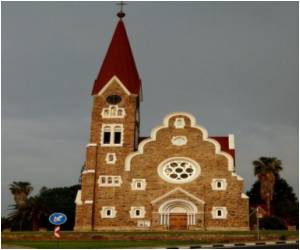 As two Orthodox Churches tied to rival patriarchates in Moscow and Kiev support opposite sides in the conflict, the pro-Russian insurgency in eastern Ukraine has deepened the country's religious divide.

In Ukraine, Orthodox Christians make up the largest denomination but the faithful are split between two Ukrainian Orthodox Churches, one loyal to the Moscow Patriarchate and the other to the Kiev Patriarchate, set up following the collapse of the Soviet Union.

In a message to the faithful last month, Patriarch Filaret in Kiev denounced "aggression against Ukraine and Russia's support for terrorists and separatists."


But Archbishop Mitrofan of Lugansk and Alchevsk who follows the Moscow Patriarchate took an opposite stance on the situation in his eastern Ukrainian diocese.
Advertisement
"We must take into account the results of referendum (on Lugansk's secession from Ukraine). Those in power in Kiev must listen to the people of Ukraine's south-east and take what they think into account," he told the Ukrainian Portal.tv website.

But support for Ukraine's pro-Russian rebels is not unanimous within the ranks of the Moscow Patriarchate.

Some Church leaders such as the Metropolitan of Donetsk and Mariupol, Illarion, have refused to take sides along the political divide.

"The Church has no right to support either side in this fratricidal war and there can be no divine blessing for violating the commandment 'Thou shalt not kill'," the Metropolitan said in an address that was read Sunday in all churches across the Donetsk region.

Despite his overt support for separatists, Lugansk Archbishop Mitrofan has distanced himself from one of his priests, Father Vladimir Maretsky, who was accused of taking part in an assault on a polling station during Ukraine's May 25 presidential election which was obstructed by the pro-Russian rebels.

Father Maretsky has been suspended from his pastoral duties while the incident is being investigated.

While Kiev is still not recognised by any of the world's 15 self-governing national Orthodox Churches, its congregation is nearly 15 percent of Ukraine's population, according to a 2006 survey by the Ukrainian Centre for Economic and Political Studies.

For many separatists in eastern Ukraine, being a patriot means being pro-Russian, an Orthodox believer and a supporter of the Moscow Patriarchate.

Separatists consider other denominations -- the Kiev Patriarchate's Orthodox Christians, Protestants, Uniates (Eastern Catholic Church) and Roman Catholics -- as alien to Russians and opponents of the pro-Russian activists' goal of rapprochement with Moscow.

Catholic Bishop Jan Sobilo, who represents eastern Ukraine, told the Vatican Radio about his concerns: "Every day, the situation becomes more and more difficult. The separatists paralyse cities. In Kramatorsk (a rebel-held flashpoint city), shots were fired at a chapel. The faithful are afraid to come to Mass."

"I receive text messages with explicit threats. Pro-Russians publish the address of our church on social networks, and explain how to find me," Donetsk's Uniate Church priest, Father Tikhon Kulbaka, told AFP.

"I spoke to police about this and they told me there's not much they can do," the priest said.

Last week, rebels in Donetsk abducted one of his friends, a Polish Catholic priest Pawel Witek, and held him captive for 24 hours.

In an even more brutal incident, the Protestant pastor Sergiy Kosyak was beaten for four hours with sticks and batons on Wednesday at the separatists' headquarters in Donetsk.

His hand bandaged and bruises still visible on his body, the pastor told AFP about his ordeal: "Several people were beating me, there was even a woman (among them). Doctors diagnosed me with a brain concussion."

Patriarch Filaret also spoke about "numerous death threats against the Kiev Patriarchate clergy and believers" in the Donetsk and Lugansk regions that are mostly controlled by the rebels.

The self-proclaimed "People?s Republic of Donetsk" set up by the pro-Russian rebels in May adopted a "constitution" which stipulates that the main religion is Orthodoxy as preached by the Moscow Patriarchate of the Russian Orthodox Church.

The Moscow Patriarchate declined to comment on the clause but it was met with concern by other religious denominations in Donetsk.

"Religious intolerance is on the rise," said Pastor Kosyak, adding that he fears the return of Soviet-era persecution of religious communities.

Fresh Church Approach Needed Towards Children of Gay Parents, Says Pope
A rethink in the way the Catholic Church deals with the children of gay couples and divorced ......

Religious Tension Mounts in China Due to Demolition of Church
Religious tension mounts due to destruction of a towering church by Chinese authorities between the ...