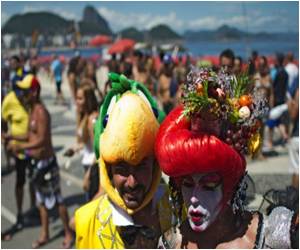 Legal unions for homosexual couples was favored by one of Brazil's top Catholic bishops in his speech, an apparent shift in the Church's stance on the country's existing gay-marriage policy.

"There needs to be a dialog on the rights attached to shared life between people of the same sex who decide to live together. They need legal support from society," Leonardo Steiner, the secretary general of the National Confederation of Brazilian Bishops, said in an interview with O Globo newspaper published on its website Thursday.

Homoesexuality (or) Same Sex Love is the hottest most discussed human trait. There has been a hunt for a Gaye gene in order to lend credibility to a growing cause.
Advertisement

Brazil, home to the world's largest Catholic population, has allowed gay marriage since May 2013, when a court ruled clerks could not reject marriage applications from same-sex couples.


At the time Brazil's bishops opposed the decision, but Steiner said the Church was constantly evolving.

"The Church isn't the same through the ages. It seeks answers for the present time, using the Gospel as the illuminating force of its action," the bishop said.

US Hits 55 Percent in Terms of Support for Gay Marriage

A Gallup public opinion poll released Wednesday projects a whooping fifty-five percent of Americans approving of same-sex marriage, the highest level ever.
Advertisement
"The Church is always seeking to read the signs of the times, to see what must or must not change. The truths of faith don't change."

Brazil does not have a gay-marriage law, and Steiner said one reason for the Church's objection to last year's court decision was that the matter had never gone before congress.

Despite the recent move towards inclusiveness, Brazil is a dangerous country for gays.

More than 300 homosexuals, transsexuals and transvestites are killed every year in the country -- including 312 last year, according to data compiled by rights group Grupo Gay da Bahia, which says the country is among the deadliest for gays.

A United Nations-backed study claims that gays are increasingly tolerated in Philippine society but discrimination persists and they remain vulnerable to hate crimes.
Advertisement
<< Iran Rift Highlighted With Arrests Over 'Happy' in a Video
Dialysis Machine For Infants For The First Time >>

How to Reduce School Bag Weight - Simple Tips Iron Intake Calculator Sinopril (2mg) (Lacidipine) Find a Hospital Noscaphene (Noscapine) Post-Nasal Drip Color Blindness Calculator The Essence of Yoga Find a Doctor Turmeric Powder - Health Benefits, Uses & Side Effects
This site uses cookies to deliver our services. By using our site, you acknowledge that you have read and understand our Cookie Policy, Privacy Policy, and our Terms of Use