Religious Tension Mounts in China Due to Demolition of Church 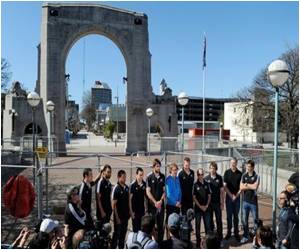 Religious tension mounts due to destruction of a towering church by Chinese authorities between the rapidly growing number of worshippers and the Communist state.

Massive slabs of concrete on a hillside were all that remained Wednesday of the Sanjiang Church after an army of excavators smashed into the building this week, following government claims it was an illegal structure.

The church stood above the village of Pudong, part of the city of Wenzhou.


The metropolis has a reputation for greater leniency towards religion and is known as China's Jerusalem with more than a million Christians, as well as being a freewheeling centre of capitalism.
Advertisement
In Pudong, Christian households are openly marked out by posters with a red cross and a Bible verse from John: "In him was life and that was the light of men."

The church was built in part with donations from the hundreds-strong congregation.

"We are crying inside, there is nothing more to say," a middle-aged man who had been a member told AFP.

"It's gone now," added his wife. They declined to give their names for fear of reprisals by authorities.

The couple said some Christians living in the area have fled while others have been visited since the demolition by government "work teams" criticising them for their religious beliefs.

China's ruling Communist Party keeps a tight grip on religion for fear it could challenge its grip on power, requiring followers to worship in places approved by the state and under government supervision.

But the Sanjiang church was registered with the authorities, unlike "underground" or "house" churches which seek to exist outside government control.

Activists believe the demolition was part of a wider crackdown on Protestant Christians, cloaked in a campaign against structures violating building codes in Zhejiang province.

The government has ordered at least five churches in Zhejiang -- four of them in Wenzhou -- to be demolished or to remove prominent crosses from their rooftops, state media has reported.

"I suspect it is a well-orchestrated campaign in order to contain the rapid growth of Christianity," said Bob Fu, president of the China Aid Association, a US-based religious rights group.

"The deliberate wounds will take years to heal and the remaining little trust between the Chinese government and Chinese religious communities is gone," he said.

Despite the constraints, the number of Christians has grown. The state-linked China Christian Council estimates the country has around 20 million Christians -- not including Catholics -- 70 percent of them living in rural areas.

But the true number of worshippers could be higher, at least 40 million to 60 million, according to some estimates.

"There has been a noticeable tightening in the religious atmosphere," said Carsten Vala, an assistant professor at Loyola University Maryland and a specialist on Christianity in China.

At the same time a younger generation of church leaders has sought to push the boundaries, he added. "The registered churches are becoming more active and evangelical -- that kind of exuberance."

There have been previous cases of churches in China going under the wrecking ball, but largely in the 1980s and 1990s, Vala said.

The local government which administers the Sanjiang Church has remained silent on the issue, but has tried to counter the images of the church being destroyed with a dedicated microblog account.

"If the illegal structure was not demolished, the government?s credibility would decline and social justice would not be fulfilled," a typical post said.

A report in state-run media after the demolition said the complex was approved on an area of 1,881 square metres (20,240 square feet) but its actual size was more than 11,000 square metres, including the main building, annexes and a car park.

But its destruction may push Christians underground.

Around 300 metres down the hill from the ruins of the church, a middle-aged woman -- converted to Christianity by her 73-year-old mother who embraced religion after illness -- said they would now seek other places to pray.

Village in China is Gunning for Tourists
In China's only remaining village where authorities encourage gun ownership, a rifle shot is met ......

Rich Mother in China Rents 'Mountain' to Teach Daughter About Nature
In China, an extremely rich mother rented out an entire mountain just so that her 9-year-old ......