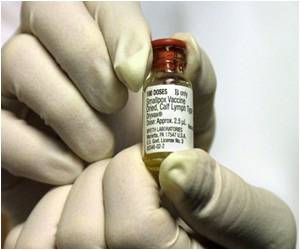 New research has uncovered how poxviruses includes smallpox evolve to rapidly adapt against host defenses - despite their low mutation rates. The research is from scientists at Fred Hutchinson Cancer Research Center and collaborating institutions.

The discovery provides new insight into how large, double-stranded DNA viruses evade host immunity and become drug resistant, and it has particular implications for understanding the mechanisms of infectious-disease transmission between animals and humans.

The 61st World Health Assembly (WHA) will be held from May 19 to 24 at the Palais des Nations in Geneva, Switzerland.
Advertisement

To determine the mechanisms of adaptation, senior author Harmit S. Malik, Ph.D., a member of the Hutchinson Center's Basic Sciences Division, first author Nels C. Elde, Ph.D., a former postdoctoral researcher in Malik's lab, and colleagues conducted an experiment in cell culture using vaccinia virus, the type of poxvirus used in the smallpox vaccine, to mimic viral adaptation and evolution as it occurs in nature.

Revelation Of How Poxviruses Such as Smallpox Evolve Rapidly Despite Low Mutation Rates: Researchers

Poxviruses are a group of DNA-containing viruses that includes smallpox. They are responsible for a wide range of diseases in humans and animals.
Advertisement
The team studied how vaccinia virus, when altered to delete the E3L gene, evolved to successfully replicate in the presence of human PKR.

"Dramatically, serial propagation of this 'weaker' virus rapidly resulted in strains that became much more successful at replicating in human cells," said Malik, who is also an Early Career Scientist of the Howard Hughes Medical Institute.

Closer examination of their mode of adaptation revealed that the virus was quickly able to defeat PKR by selectively increasing the number of copies of the K3L gene in its genome.

Malik likened this rapid adaptation to the expansion of the bellows of a musical accordion.

"As the K3L copy number increased in subsequent rounds of replication, so did expression of the K3L protein and subsequent inhibition of the immune response," he said.

This showed that viruses that can quickly expand their genome have an immediate evolutionary advantage over those that cannot.

In a further extension of the accordion analogy, in addition to observing rapid gene expansion in the E3L-deficient strain of vaccinia, the researchers also observed that the virus contracted after acquiring an adaptive mutation, swapping a beneficial mutation for a smaller genomic footprint.

"Our studies suggest that despite their transient nature, gene expansions may provide a potent means of adaptation in poxviruses, allowing them to survive either immune or pharmacological challenges," Malik said.

Recognizing the means by which they undergo this expansion may provide more effective antiviral strategies against these and related important pathogens, the researcher added.

Their findings are described online ahead of the Aug. 17 print issue of Cell.

Source: ANI
Advertisement
<< Man Had Swallowed a Fork Ten Years Back
Melting at An Alarming Rate Are Continental U.S. Glaciers >>