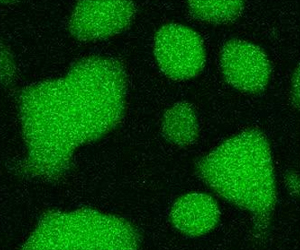 Study published in journal Structure shows how ALS-linked mutations disrupt the protein TDP-43 at the atomic level, preventing it from executing its proper function and instead leading to the aggregrates of the protein.

"We knew that part of TDP-43 builds up in aggregates and that there are 50 mutations in that domain, but we didn't know the job of that domain, how it goes wrong and why it aggregates," said study corresponding author Nicolas Fawzi, assistant professor in the Department of Molecular Pharmacology, Physiology and Biotechnology at Brown University.

In general, TDP-43 acts like a chaperone for RNA in a cell, binding to it, guiding its processing, transporting it to where it needs to go and regulating it, so that other proteins can be expressed properly. Using nuclear magnetic resonance, computer simulations and microscopy, Fawzi, Brown graduate student Alexander Conicella and colleagues at Lehigh University were able to show that under normal circumstances, TDP-43 molecules concentrate into little droplets, a process called "liquid-liquid phase separation." It's within these droplets that they could process and ferry RNA.

The team's focus was on a particular region of TDP-43, called the "C-terminal domain," which appeared to be crucial in the concentration of molecules that leads to phase separation.

Funding for further study in ALS has been generated through the ice bucket challenge that went viral in the summer of 2014.
Advertisement
"We were looking for a functional role for this part of the protein," Fawzi said "Its job can't just be to do nothing and then aggregate in disease."

The observations showed that the interactions and resulting concentration of TDP-43 molecules depend on a small corkscrew-shaped part of the protein's C-terminal domain termed a helix. The same sequence of DNA specifying that corkscrew shape has been exactly preserved by evolution in many vertebrate animals suggesting it has an important biological function.

What Fawzi and his teams observed is that as one TDP-43 molecule meets another, the corkscrews stabilize and lengthen, promoting a bond between them.

Finally, the team shows in the paper that the various ALS mutations disrupt this process, either by upsetting the formation of the corkscrews or their ability to lengthen and stabilize.

"Mutations in this [corkscrew] region blow that interaction up," Fawzi said.

The result is that the concentration and phase separation does not occur. Instead the proteins can combine in a more potentially harmful way -- in the aggregates seen in diseased neurons.

By ferreting out this mechanistic connection between the mutations, the loss of protein's proper phase separation behavior and how it frees molecules up to aggregate, the team shows how the mutations could lead to disease, Fawzi said.

"That might be one mechanism by which ALS mutation cause ALS -- by disrupting TDP-43's normal function," he said.

The paper further emphasizes the urgency of an overarching question in ALS. Only about 10 percent of ALS cases are traceable to a genetic cause. It remains unclear what's happening to disrupt TDP-43 in many cases when a known mutation is not the cause.

But now scientists have new a new set of data and an explanation of how TDP-43 appears to work and what can make it fail.


That's also important, Fawzi noted, because TDP-43 is implicated in other degenerative neural diseases as well.

"Given the recent evidence that TDP-43 also accumulates in Alzheimer's disease, understanding the role of TDP-43 is all the more urgent," he said.

Bone marrow transplantation may one day be beneficial to a subset of patients suffering from amyotrophic lateral sclerosis.
Advertisement

Apert syndrome is a rare inherited condition marked by abnormal shape of the face and skull due to premature ...

Gilberts syndrome is a common, mild liver disease in which a liver enzyme required to process bilirubin is ...

Mutations are the sudden changes that occur in genetic materials. They occur as a part of evolution and give ...

McArdle disease is a genetic disorder in which the body cannot breakdown glycogen in the muscles. It also ...
This site uses cookies to deliver our services.By using our site, you acknowledge that you have read and understand our Cookie Policy, Privacy Policy, and our Terms of Use  Ok, Got it. Close
×