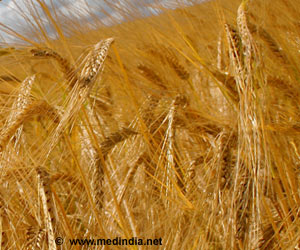 At the University of Adelaide, new research has opened the way for the development of new lines of barley with resistance to powdery mildew.

In Australia, annual barley production is second only to wheat with 7-8 million tonnes a year. Powdery mildew is one of the most important diseases of barley.

Senior Research Scientist Dr Alan Little and team have discovered the composition of special growths on the cell walls of barley plants that block the penetration of the fungus into the leaf.


The research, by the ARC Centre of Excellence in Plant Cell Walls in the University's School of Agriculture, Food and Wine in collaboration with the Leibniz Institute of Plant Genetics and Crop Plant Research in Germany, will be presented at the upcoming 5th International Conference on Plant Cell Wall Biology and published in the journal New Phytologist .
Advertisement
"Powdery mildew is a significant problem wherever barley is grown around the world," says Dr Little. "Growers with infected crops can expect up to 25% reductions in yield and the barley may also be downgraded from high quality malting barley to that of feed quality, with an associated loss in market value.

"In recent times we've seen resistance in powdery mildew to the class of fungicide most commonly used to control the disease in Australia. Developing barley with improved resistance to the disease is therefore even more important."

"Powdery mildew feeds on the living plant," says Dr Little. "The fungus spore lands on the leaf and sends out a tube-like structure which punches its way through cell walls, penetrating the cells and taking the nutrients from the plant. The plant tries to stop this penetration by building a plug of cell wall material - a papillae - around the infection site. Effective papillae can block the penetration by the fungus.

"It has long been thought that callose is the main polysaccharide component of papilla. But using new techniques, we've been able to show that in the papillae that block fungal penetration, two other polysaccharides are present in significant concentrations and play a key role.

"It appears that callose acts like an initial plug in the wall but arabinoxylan and cellulose fill the gaps in the wall and make it much stronger."

In his PhD project, Jamil Chowdhury showed that effective papillae contained up to four times the concentration of callose, arabinoxylan and cellulose as cell wall plugs which didn't block penetration.

"We can now use this knowledge find ways of increasing these polysaccharides in barley plants to produce more resistant lines available for growers," says Dr Little.

More News on:
Magical Millets for Your Health Barley and its Benefits

New Barley Strain Good News for Digestive and Bowel Health
CSIRO, Australia's national science agency says it has developed a new strain of barley that could ....

Heart Healthy 'Super Spaghetti' Coming Soon
A new genre of pasta made with barley is ready to hit the shelves labeled "good source of dietary .....

Barley and its Benefits
Health benefits of barley far outweigh any contraindications of this wonder grain and its simplicity...