Some good news coming in from Australia for those suffering from digestive or bowel-related problems. Interestingly it is named after Himalayas.

The findings of a study a study carried out by the CSIRO Food Futures Flagship published in the British Journal of Nutrition.

CSIRO, the Commonwealth Scientific and Industrial Research Organisation, is Australia's national science agency and one of the largest and most diverse research agencies in the world.


The new barley variety, Himalaya 292 - re-named BARLEYmax - has been successfully tested in a number of foods, such as breakfast cereals and bread.

"In fact the fibre level of BARLEYmax in wholemeal flours is approximately double the level found in conventional wheat or oats and approaches that of processed wheat bran.

"The high levels of amylose result in the formation of resistant starch which, combined with the very high fibre level, is thought to be largely responsible for the health benefits shown in the study."

The study was conducted at the CSIRO Human Nutrition Clinic in Adelaide, South Australia.

In the trial, 17 male and female volunteers aged 31 to 66 years consumed similar quantities of BARLEYmax, whole-wheat or refined wheat cereal foods for four weeks in a randomised cross-over design. Total dietary fibre intakes were 45, 32 and 21 grams per day for the three cereals respectively.

The pH and butyrate concentration and excretion were also significantly higher compared to whole-wheat.

The study concluded that consumption of a diet that included consumer foods such as bread, breakfast cereals, biscuits and muffins made from BARLEYmax supplied more fibre and improved indices of bowel health compared with equivalent levels of intake of refined cereal foods and, for some indices, similar whole-wheat foods.

"This research opens the way to a new generation of healthier food that could be of real value in promoting the health of consumers," Dr Topping says.

Trial commercial quantities of BARLEYmax are currently planted in Australia. 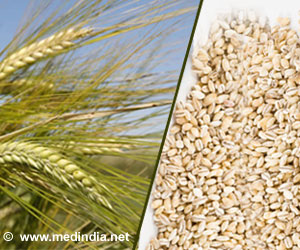 Barley and its Benefits
Health benefits of barley far outweigh any contraindications of this wonder grain and its simplicity and availability are what we should take advantage of.
READ MORE