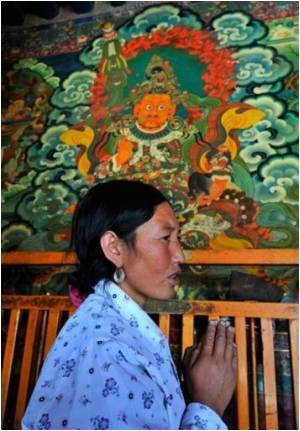 Frail and wrinkled Pan Xianying does not at first glance look like a tourist attraction even as she gingerly sits between her two sons.

But the mother of seven, now nearly a century old, is one of three remaining members of a famed Communist all-women army unit in China and a living attraction on a "red" tour of the southern island province of Hainan.

As the Communist Party marks the 90th anniversary of its founding on July 1, a wave of officially-encouraged interest in the revolutionary era has bubbled up -- even on Hainan, which is known more for its luxury hotels and beaches.


"She's not feeling too good today," one of Pan's sons said apologetically as his mother, her white hair in a neat bob, spoke in her local dialect, sometimes raising her voice in apparent confusion.

Medical Tourism has become a serious enterprise in India over the last two years. However some hospitals have been practicing it for quite a few years.
Advertisement
Pan's family believes she is around 95 -- accurate Hainan birth records from those days are hard to come by -- and was about 15 when she joined a newly created all-women army unit in 1931.

A young local Communist formed the battalion in Hainan in a push for gender equality.

Created to protect party leaders and fight rival Nationalist forces during China's protracted civil war, the unit -- composed of 140 women at its height -- disbanded several years later when the Nationalists drove the Communists underground in Hainan.

But its members were hailed once again as heroines after Mao Zedong's victorious forces took over China in 1949 and the unit has since inspired a popular ballet -- "The Red Detachment of Women" -- and several films.

Local authorities in the rural community of Qionghai decided to capitalise on the detachment's fame this year with tours of its former training grounds and meeting spots.

The tours attracted 360 people in April, some coming as part of events organised by their employers, others independently.

Besides old revolutionary sites -- one of them just a bare field where influential communists once met long ago -- outdoor sports such as hiking are also on offer.

The hikes are billed as instilling army-style camaraderie among tour members and follow a route that Red Army soldiers are said to have struggled through.

"When you read written records in books, it doesn't give you much of a feeling for things," said red tourist Zhao Kexin, a 20-year-old university student from the nearby city of Haikou who paid 138 yuan ($21) for a one-day tour.

"You have to go experience it yourself, what the route was like, how difficult it was to go through. Only then can you get a deeper understanding."

The tour guides sport revolutionary-style green caps complete with a red star, which visitors can buy for 10 yuan. They can also choose to wear a full soldier's uniform for 100 yuan.

'Red' tourism is not new in China, where the party has deftly managed to keep alive memories of the communist revolution even as it has transformed the country into an economic powerhouse.

The Hunan province city of Shaoshan where Mao was born and the longtime Communist base of Yan'an in Shaanxi province are already star attractions.

But the trend is gaining ground. In the southwestern city of Chongqing, authorities have ordered state radio and television to promote the mass study of "red songs" praising the Communist Party.

Citizens are being urged to download tunes from websites, while newspapers print their lyrics, state media reported. Other cities have made similar moves.

In Qionghai, tourists can meet Pan at her home nestled in a palm grove.

Her sons regale visitors with her story, such as when Pan -- the unit's youngest member -- fought for a day and a night, losing many comrades.

Pan's husband Huang Shishen recalled meeting her after the battalion was disbanded, falling in love and asking for her hand knowing he could get into trouble with the rival Nationalists.

By then Pan had decided to retire to her rickety old bed, worn out by all the attention.

Chen Doushu, head of the agency organising the tours, said red tourism reflects a desire by many to look fondly back at the past after more than 30 years of focus on the future during China's rapid recent modernisation.

"Chinese people cannot forget their history, and the best way to do that is to go and remember it, to study it. That's where red tourism comes from," he said.