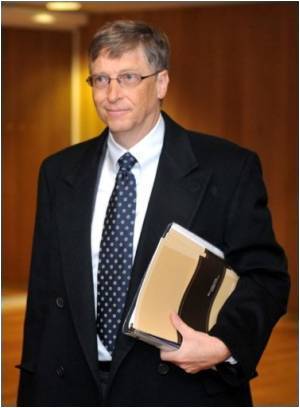 Bill Gates exhorted governments and health advocates to get value for the money spent on fighting AIDS.

"We are facing a major challenge in terms of funding because the global economic downturn has got a lot of governments looking hard at their budgets, and some doing decreases in the kind of aid that goes for global health, and AIDS in particular," Gates told reporters.

The former Microsoft boss, who now runs a philanthropic foundation with his wife, Melinda, was speaking days before he is due to deliver a keynote speech at a world conference on AIDS in Vienna, Austria.


"We'll push to have more (funding) there but we've hit some limits and we're going to have to get as much as we can out of the funding that exists," Gates said.

Encyclopedia section of medindia gives general info about AIDS information and health education.
Advertisement
"We need to apply new innovations to get more out of every dollar of funding that is available, and it's this point that I'll stress as one of the key points of my speech on Monday," he said.

The key to winning the war against AIDS, even in times when funding is restricted, is to "maximize the impact" of the global AIDS effort, said Gates.

Governments and activists have to focus their prevention efforts on groups that are most at risk, he said.

"I am talking about, in some countries, injecting drug users; in some countries, men who have sex with men. In a place like South Africa, it's youths in the townships. Prevention can be more impactful if we really go after the groups in each geography that are most at risk," Gates said.

He called for a continued push to bring down the cost of HIV treatment and urged governments and other funders to continue to back AIDS research, one of the main goals of which he said should be to come up with a "significantly effective AIDS vaccine."

Rich nations' cash pledges to combat climate change must not come at the cost of healthcare spending, Microsoft co-founder Bill Gates warned in an interview published Tuesday.
Advertisement
Advertisement
This site uses cookies to deliver our services.By using our site, you acknowledge that you have read and understand our Cookie Policy, Privacy Policy, and our Terms of Use  Ok, Got it. Close
×