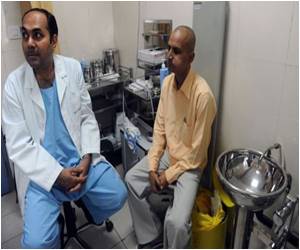 Punjab Monday ordered a complete ban on the sale, storage, manufacture and distribution of tobacco-based products such as gutka (tobacco-laced areca nut pieces) and pan masala in the state, says officials.

Chief Minister Parkash Singh Badal had approved the proposal of the state health and family welfare department for banning such products across the state, he said.

India Gets Strict on 'Gutka' or Chewing Tobacco

Anil Kanade seems almost too stunned to speak about the deadly cancer recently found in his mouth, caused by his addiction to a popular Indian chewing tobacco that doctors say is fuelling an epidemic.
Advertisement

"This has been done in the larger interest of public health. The chewing of gutka, pan masala and other tobacco products was a potent health hazard and responsible for deadly disease of cancer especially of mouth and throat," he added.


He said that other food products containing tobacco or nicotine as ingredients, by whatsoever name, had also been banned.

These products were earlier banned only in the districts of Amritsar, Ropar, Mohali and Mansa as these have famous religious shrines.

Ban On Gutka And Paan Masala Being Considered By UP Government