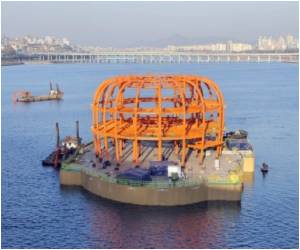 Tracing its roots back to the 19th century, a lengthy property market slump and low interest rates are threatening the future of a uniquely South Korean home lease system.

"Jeonse" contracts have been a mainstay of the South's housing market for decades, offering tenants the enticing, and at first sight startling prospect of not actually paying rent.

Instead, the tenant forks out a hefty, up-front deposit -- typically around 40 percent of the property's value -- which is then refunded in its entirety, or renewed, after two years.


At its peak in the mid-1990s, two-thirds of all housing rents and leases in South Korea were using the jeonse system.

The benefit for landlords was a large capital sum they could invest in high-yield opportunities that were plentiful during the country's rapid industrialisation in the 1970s and 80s, when banks often offered double-digit interest rates.
Advertisement
Those investment opportunities included financing second or third properties purchased as a speculative investment on the back of fast-rising housing prices.

Landlords could return the deposit at the end of a contract and keep profits, or find a replacement jeonse tenant who effectively pays the deposit of the departing tenant when their contract begins.

The system was also a boon for first-time home buyers at a time when mortgages were hard to come by because of government policies that pushed banks to lend to manufacturing firms at the heart of the country's export-driven growth model.

Typically, a property occupied by a jeonse tenant was traded at a price excluding the up-front deposit.

So buyers could get a home at the fraction of its cost, although they would eventually have to pay the departing tenant's deposit before taking up residence themselves.

"Essentially, the jeonse deposit played the role of a bank loan, which the home buyers could pay back in the future when they amassed enough savings and were ready to actually move in," said Kwon Joo-An, analyst at Seoul-based Korea Housing Institute.

But some didn't bother to move in.

Speculators would snap up several jeonse-leased houses at discount prices and then sell them at a huge profit, riding on and further fanning a real estate price surge.

In 1978, property prices soared 49 percent across the country, 79 percent in six main cities and a stunning 136 percent in the capital Seoul alone.

"Back then, jeonse was also a popular way to increase personal wealth," said Kwon.

"That's what sustained the jeonse system for decades -- the belief that property prices would just keep rising."

Speculation and property price inflation became a major challenge for policymakers, and successive administrations introduced measures to cool things down, but to limited effect.

In the end, it was brought to heel by changing market conditions brought about by a multitude of socio-economic factors -- ranging from an ageing population to the global slowdown.

Since 2008, both interest rates and property prices have fallen -- seriously undermining the twin foundations that sustained the jeonse system.

The low rates negatively impact a key benefit for the landlord -- investing the jeonse capital sum at a high-level of return.

With investment opportunities limited, landlords began switching from an under-performing jeonse to a monthly rental system more familiar to the rest of the world.

Rentals accounted for around 30 percent of leases in 1995, but that share had risen to 50 percent by 2010, and is believed to have increased further in the years since then.

The jeonse share of leases dropped by a corresponding amount from 67 percent in 1995 to 50 percent in 2010.

At the same time, existing jeonse tenants with enough savings to buy their own homes have been holding off in the hope that property prices will continue to fall.

This, coupled with the switch to monthly rentals, has resulted in a dearth of new jeonse contracts with demand far outstripping supply, and the jeonse deposit demanded by landlords has skyrocketed.

- Keeping up with the jeonses -

The average up-front jeonse payment now stands at more than 65 percent of the property's value -- compared to 42 percent in 2008 -- and in some cases it has gone as high as 90 percent.

"I don't think the jeonse system will disappear, but in the long run more landlords are going to demand monthly payments, pushing jeonse out," Kwon said.

This is a disaster for people like June Lee, a 27-year-old office worker who plans to marry later this year.

Lee and her fiancé believed the 100 million won ($100,000) they had saved would secure them a jeonse rental on an 80-square-metre (860-square-foot), relatively new apartment on the outskirts of Seoul.

"But now the landlords are either asking for a ridiculously huge deposit or they want monthly rent," Lee said.

"How are we going to save money if we have to waste so much on the rent every month?" she added.

Son Jae-Young, a professor of real estate studies at Konkuk University in Seoul, said the jeonse system had reinforced the widely-held view that monthly payments were tantamount to throwing money away.

"Obviously, it cuts disposable income and savings ... making it even harder to buy a home later," he said.

Housing prices were driven so high during the boom years that, even though they have fallen significantly, they remain out of the reach of many young South Koreans.

The Best Education System in World is in South Korea
Rankings from education and publishing firm, Pearson, name South Korea as the best place in the ......

French Cheese Experts Turn Down Offer to Train North Korea
A rare opportunity to train the North Koreans in the proud Gallic art of cheese-making was turned .....