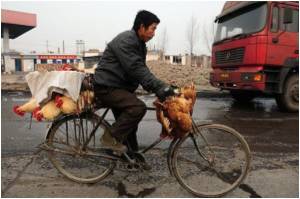 The 22-year-old, who was four months pregnant, contracted the illness in late May and died last Thursday in the central province of Hubei, a notice on the ministry's website said.

She was diagnosed with avian influenza (H5N1) a day before dying, it said.


An investigation by China's Centre for Disease Control and Prevention found that the woman had contact with poultry before she fell ill but that no avian flu infections were found in birds near her home, it said.

Influenza (or rather, the flu) is a cold weather infectious condition that affects the young and old alike. Though most reported cases are mild, the flu can sometimes cause severe and life-threatening complications in both children and adults, thanks to wrong medications and improper vaccinations. Learn more about the disease from our Flu Quiz and guard yourself and your family from a poss
Advertisement
It added that it was not clear how she contracted the illness as no outbreaks have been detected in poultry since last year.

Her death brings to 26 the number of people who have died in China since the virus re-emerged in 2003, out of 39 reported human cases, based on previous World Health Organization figures.

Experts fear the H5N1 virus could mutate into a form easily transmissible between humans, rather than from poultry to humans, with the potential to kill millions in a pandemic.

China saw eight human cases of infection -- five of whom died -- in the first two months of 2009, sparking pandemic fears, but no further cases have been reported by Chinese authorities since then.

Bird Flu Still Remains a Threat to Humanity: WHO

Bird flu outbreaks that have killed seven people in several countries so far this year show the virus remains a threat to humans, the World Health Organisation (WHO) said Wednesday.
Advertisement
Advertisement