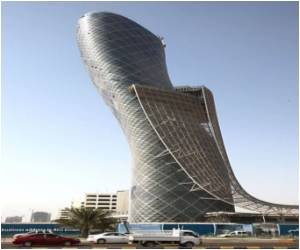 An Abu Dhabi tower has been recognised as the "furthest-leaning man-made tower" in the world by Guinness World Records, local newspapers reported on Sunday.


ADNEC said the tower earned the record following an evaluation by Guinness World Records that began in January, the month the tower's exterior was completed, Gulf News reported.


Capital Gate was designed from the get-go to take an angled stance, unlike the Tower of Pisa, which slanted over with time.

The 35-storey tower's 18-degree angle is achieved by staggering the floor plates from the 12th floor up, the newspaper added.

The tower is expected to be completed in late 2010 and will house a five-star hotel and offices.

The United Arab Emirates is home to another world record building, the 828-metre Burj Khalifa in Dubai, which is the tallest building in the world.

New World's Tallest Tower Unveiled in Dubai
Dubai's Burj Khalifa tower, the new tallest building in the world, is 828 metres tall, it was revealed on Monday at the skyscraper's official opening in the Gulf emirate.
READ MORE

World's Tallest Tower Reopen - Crowds Throng for View of the World
Dozens of visitors lined up to ascend the viewing deck of the world's tallest tower in Dubai on Monday, which reopened after an elevator breakdown forced its closure only a month after
READ MORE

Iconic Sears Tower to be Known as the Big Willie?
The tallest building in the United States happens to be the iconic Sears towers in Chicago.
READ MORE

Eiffel Tower Replica to Rise Amidst Indian Coconut Groves
It's been copied in Las Vegas and hangs on a thousand keyrings. Now another replica of the Eiffel Tower is to be built in former French-occupied area in India.
READ MORE