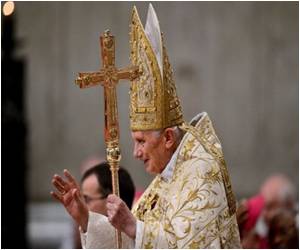 Pope Benedict XVI to retire to a former gardener's house and lead a life of prayer.

A lot of lot of shuffleboard games for the soon-to-be former Bishop of Rome, successor of St. Peter, head of the College of Bishops, Vicar of Christ, and Pastor of the Universal Church, Pope Benedict XVI, should not be expected, according to a report.

Benedict will become the first retired pontiff in 600 years, and with no modern guides, everything he does will be pioneering for a 21st century papal retiree.


According to CNN, the pope will leave his seat at the ornate Apostolic Palace and retire to a former gardener's house at the Vatican to lead a life of prayer, likely removed entirely from public life.
Advertisement
Benedict, who will be known 'pope emeritus', will forego his ornate papal wardrobe and elbow-length cape, called a mozzetta, for a simple white cassock.

He also will retire his red shoes in favor of a brown pair picked up on his trip to Mexico last year.

According to the report, the Pope, 85, will first leave Rome to go to the papal seaside retreat, Castle Gandolfo, until a successor is named.

Then he will head to the Mater Ecclesiae (Mother of the Church) building, which formerly housed a cloistered convent in the Vatican gardens.

Benedict is likely to keep a small staff at the house to tend to his needs.

There may be a stipend for the retired pope. Italian news outlets have reported retired clerics receive up to 2,500 Euros a month, the report said.

The Vatican will take care of his lodging and his health care, it added.

Source: ANI
Advertisement
<< Same Sex Couples may Have Poorer Health
Painkillers are a Regular in the Lives of Seven Million Peo... >>