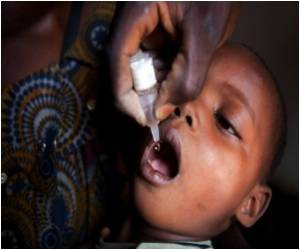 Hundreds of vaccine-carrying health workers trekked to far-off villages and hamlets in Sierra Leone Friday at the start off of a campaign to vaccinate over one million children under the age of five against polio, health ministry officials said.

"There is much excitement in the campaign and mothers have committed themselves to bring their kids to vaccination centres around the country," one of the organisers, Tity Turay, said.

She said the four-day first-round "campaign, supported by UNICEF, the WHO, Rotary International and other development partners, will cover all 12 districts in the country and 13 other countries in the sub region.


"We are working hard to halt the spread of polio both in Sierra Leone and the sub region and this is achievable," she said.

UN officer Dr Nuhu Matesha told reporters that "polio is one of the viruses that can be eradicated from the face of the earth like smallpox".

Global polio eradication programs have significantly cut the incidence of the disease, yet it is an apt time to take stock of what remains to be done to 'Stop Polio Forever'.
Advertisement
"We know that we still have some children that were missed in the past and we are also aware that some countries in the sub region have the polio virus circulating."

"The only way to protect under-fives from the disease is through the administration of two doses of the vaccine every year."

"Sierra Leoneans still do not know the causes of polio attributing it to witchcraft and other mysteries despite the availability of very effective evidence-based intervention."

"Just two drops of the vaccine can make a major and long lasting positive impact on children's lives," he added.

The World Health Organisation Representative in Sierra Leone, Dr Wondimagegnehu Alemu, said that "despite two preventive and three reactive rounds of immunisation campaigns in 2009 and two in March 2010, there is evidence that the wild polio virus continues to circulate in the country and the west coast of Africa".

Sierra Leone was polio-free between 2000 and July 2009 when 13 new cases were confirmed in six districts.

The most recent case of polio was discovered in February 2010.

Find a Hospital Vent Forte (Theophylline) Color Blindness Calculator Loram (2 mg) (Lorazepam) Turmeric Powder - Health Benefits, Uses & Side Effects Drug Side Effects Calculator A-Z Drug Brands in India Daily Calorie Requirements Indian Medical Journals The Essence of Yoga
This site uses cookies to deliver our services.By using our site, you acknowledge that you have read and understand our Cookie Policy, Privacy Policy, and our Terms of Use  Ok, Got it. Close
×