Plight of Abandoned Children Being Looked into in Bulgaria 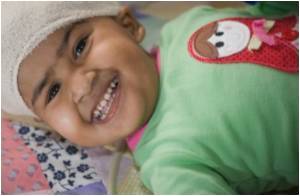 Abandoned children are a pitiable sight in any country - more so in Bulgaria.

Kuna, a pretty eight-year-old girl, lives in an orphanage in Bulgaria, abandoned by her family, but her Roma origins mean her chances of adoption are almost nil.

"Kuna's features do not reveal her origins, but her documents dissuade adoption candidates," said Nadya Dzhunova, director of the Slaveykov children's home in Sofia.


Indeed, Bulgarians are still highly prejudiced against the poor Roma minority, suspecting them of abandoning children at a young age only to claim them back when they are old enough to earn money.

A small hole or passage has developed in the muscle in the baby''s groin. Some of the intestine is poking out through this.
Advertisement
At Slaveykov, Kuna lives alongside 61 abandoned children aged seven to 18, including six who are handicapped.

Her parents only kept two of their seven children but they refused to give up their parental rights over the little girl and four of her siblings, meaning the children could not be put up for adoption and would have been condemned to live in orphanages until adulthood.

But a new law that came into force in October means children who have spent more than six months in institutions and have not been taken back by their parents can now be put up for adoption, without the parents' approval.

This has already allowed Kuna and her four siblings to make their way onto adoption lists.

The practice of leaving children to the state's care due to poverty or a child's disability goes back to communist times and Bulgaria now has one of the highest rates of abandonment in the European Union, with some 6,730 children left to the care of state institutions.

"The problem is difficult to solve after 50 years during which the state readily placed in an institution any child at risk," deputy social minister Valentina Simeonova explained.

This was the case for eight mentally disabled teenagers, who after years in a dilapidated children's home in the remote village of Mogilino in northeastern Bulgaria, recently moved into their own house in the western village of Glozhene.

Confined to a wheelchair, 20-year-old Sergey can neither walk nor talk. Blind since birth, he was often tied to his bed at Mogilino to keep him still, according to the nurses at his new home in Glozhene.

Sergey and several dozen other children and adolescents with disabilities lived at Mogilino behind "a barbed wire fence and barred windows," cared for by unqualified, indifferent staff, according to Branimira Pavlova, head of a daycare centre in Teteven that temporarily hosted the eight youngsters.

The utter misery there sparked a nationwide fund-raising campaign, supported by UNICEF, the UN Children's Fund, and private bTV television, to build new homes for the children and eventually close down the orphanage.

The government now plans to shut by 2013 all 27 remaining institutions for children with serious disabilities. Most of these facilities are situated in poor remote villages.

Meanwhile, it is encouraging the creation of daycare centres like the one in Teteven, where teams of nurses, psychologists and teachers can take care of children with disabilities during the day, allowing the parents to go work.

Almost 98 percent of abandoned children in Bulgaria still have parents somewhere and social workers are seeking to encourage them to take their children back or place them in foster care.

Some 1,200 children aged 12 and above, or with grave disabilities, have been put on a special list for adoption abroad, mainly in the United States, Canada, Sweden and Italy, where families are more open to adopt these children.

Authorities are also seeking to limit the number of abandoned babies, aged three and under, which currently number 2,300 in all of Bulgaria.

In 2009, 536 Bulgarian babies were adopted domestically and 103 abroad, including 23 percent who had some sort of disability.

"If we manage to do away with abandonment at birth, we will manage to reverse the high number of children in institutions," Simeonova said.