Pharmacists in South Korea Warn Against Panic-buying of Iodide Pills 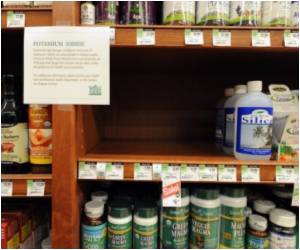 Fears over possible radiation has spread across the Internet, prompting Seoul to launch a crackdown on scaremongering, with officials insisting that westerly winds will blow radiation out into the Pacific.

"Anxiety over radiation exposure is growing in this country following the explosion at Japan's nuclear power plants," the Korea Pharmaceutical Association said in a statement.


"Drug stores are being flooded with calls from people seeking to purchase iodine," it said.

The association said iodide tables could reduce the risk of thyroid cancer from radiation exposure but could also put users at risk of allergic reactions and problems with thyroid glands.

Fears over radiation deepened on Thursday as Seoul started screening travellers from Japan and Japanese food for radiation.

The Financial Supervisory Service watchdog is investigating the source of a rumour doing the rounds in the markets which exacerbated a stock market plunge on Tuesday.

In South Korea, those who cause confusion by spreading false rumours can be jailed for up to a year.

Aviation companies said Thursday that flights from Tokyo were fully booked as growing numbers of South Koreans joined the exodus from quake-hit Japan.

It plans to add three to five flights to its normal four flights per day, to carry an additional 5,000 passengers between Wednesday and Sunday, a Korean Air spokesman said.

Asiana Airlines, the second largest South Korean airline, said it had added one flight a day to its regular four from Narita to Incheon.

It cancelled all flights to and from Fukushima for fears over radiation fallout after it closed the routes to the tsunami-hit Sendai City and Ibaraki Prefecture.

The Korea Football Association said Thursday that Montenegro had called off a football friendly with South Korea scheduled for next week because of concerns over feared radiation fallout.

"Players, their relatives and clubs opposed the visit to Seoul because of the quake and radiation leaks," it said in a statement.

Hawaiian store owners said people on the Pacific island US state are rushing to get iodide pills to protect against radioactivity from a quake-crippled Japanese nuclear power plant.
Advertisement
<< Rush for Iodine Supplements in Hawaii to Ward Off Radiation...
Prenatal Sex Selection Services Lead to Imprisonment >>