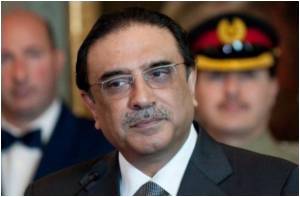 Pakistan President Asif Ali Zardari, who is currently undergoing treatment in Dubai, is in a better condition now and walked for 10 to 15 minutes in the presence of a doctor.

The News quoted the hospital sources, as saying that Zardari would undergo further tests on Sunday for which he has to stay in hospitals for more days.

The President's personal physician had announced the previous day that he would release medical bulletin on daily basis, however no bulletin has been made public. Meanwhile, Zardari appeared in a private TV channel, claiming that he was 'fine' and would return to Pakistan soon.


"I'm fine and will return soon. I did not want to leave. My children and friends and the prime minister insisted that I go for a checkup," he said.

Heart disease is a major killer worldwide in spite of major strides in the medical field in terms of research, diagnosis, treatment and pharmacology. HIV/AIDS and Alzheimer's disease are vying for popular attention these days and people tend to sideline or neglect healthy heart awareness. Take our quiz and refresh your awareness on heart disease.
Advertisement
Even as Indian media reported that Zardari may be flown to Britain for further treatment, Pakistan Government sources denied such speculations yesterday saying that he will remain under medical observation in Dubai for few weeks before returning home. Zardari is reportedly suffering from heart ailment and his admittance to the hospital sparked fevered speculation in Western and Pakistani media that he might be on his way out.

Zardari's name has been brought up in the Memo Gate scandal, with a Pakistani-American businessman claiming that the former had prior knowledge about the US raid that killed former al-Qaeda leader Osama bin Laden.

If he remains in office until his five years mandate ends in 2013, and polls are held, it would be the first democratic transition of power in Pakistan.

Stroke is the third most common cause of death and the most prominent cause of physical deformity in the world
Advertisement
<< Stress In Early Pregnancy Linked To Premature Births, Fewer...
Scientists Identify Novel Therapeutic Approach To Prevent L... >>

Foods that Can Save Your Heart