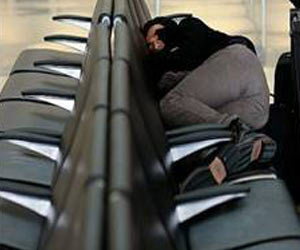 Stuffed with synthetic material - "for maximum performance and lightness", according to its inventors - the distinctive-looking pillow has a hole in which to put your head, and a mouth hole designed to allow its wearer to breath easily, the Sydney Morning Herald reported.

It also has two side holes where you can store your hands - if napping at a table in a library, for example.


The concept was developed by Kawamura-Ganjavian, an architecture and design studio with offices in Madrid and Lausanne.

Among other products, the company has also been responsible for developing the "ear shell" (a "sound enhancing device" that is attached to the ear), and a solar plug for charging portable computers.

The comfort of modern life comes at the cost of restful sleep! "Laugh and the world laughs with you, snore and you sleep alone-Anthony Burgess" Scientifically it is proven that a good night's sleep is imperative for maintaining a balance between the physical, emotional and behavioral well-being of a person.
Advertisement
The Ostrich Pillow has been described on the technology web site CNET as like "a giant garden squash gone soft", while another reviewer for the Digital Trends website wrote: "We can only wonder how the pillow holds up on sweat and heat retention."

Its creators argue that it genuinely works, saying: "We have tried it in airports, trains, aeroplanes, libraries, at the office, on a sofa and even on the floor and it's really wonderful."

The Ostrich Pillow will go into production if its fundraising targets are met. The company is currently trying to collect 70,000 dollars on Kickstarter, a funding website for creative business ideas.

Insomnia has become a serious health problem and people tend to depend on quick yet risky solutions to get rid of it. But here is the list of nature's best sleep inducing foods right in our kitchen.
Advertisement
<< Leonardo Da Vinci's 'Mona Lisa' to be Shown in Geneva
Children Should Play Outdoors to Get Healthier, Tougher >>