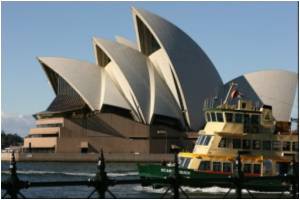 Sydney Opera House was declared Australia's best-known icon ahead of its 40th birthday this weekend, in a report that said it was worth Aus$775 million to the economy every year.

The Opera House is more highly esteemed abroad than "national brand Australia itself", accounting firm Deloitte said in a report prepared to coincide with the 40th anniversary of the building's opening Sunday.

The Opera House injected Aus$775 million (US$740 million) into the economy every year both directly and by attracting tourists to the country, the report found.


Over the next 40 years the site is estimated to be worth Aus$4.6 billion, including ticket and retail sales, but also Aus$2.1 in what the report called "intangible cultural, iconic and national identity value".

UNESCO has revealed that the Margravial Opera House in Bayreuth, Germany, which is famous for its annual Wagner festival, joins the list of sites classed by it as world heritage.
Advertisement
"When we?re talking about brands, the Sydney Opera House is quite simply Australia?s best," said Deloitte partner David Redhill.

"Forty years ago it was one of the biggest, bravest ideas we?d taken on as a nation. Today, it?s repaid the faith Australia had in it; nothing else in Australia commands the same degree of universal admiration or affection as the Opera House."

Visitors were prepared to pay 22 percent more for tickets simply because an event was held at the Opera House, a 3,000-person survey of attitudes to the venue by Deloitte found.

More than half of the approximately 650 tourists surveyed from China, the United States, Britain and New Zealand said the Opera House was their main reason for visiting Sydney, with the precinct accounting for 10.6 percent of the city's tourism spending.

The Opera House attracts an average 1.4 million people to its performances every year, of which there were 1,800 in 2011-12.

Of the 2,500 Australian residents polled, 77 percent believed it made a significant contribution to national culture, Deloitte said.

Designed by Danish architect Jorn Utzon -- relatively unknown when he won the 1956 international design contest -- the Opera House took 14 years and Aus$102 million to complete, funded by a state lottery.

When it was added to the World Heritage list in 2007 UNESCO described it as "one of the indisputable masterpieces of human creativity, not only in the 20th century but in the history of mankind".

It was one of the most difficult engineering feats ever attempted at the time, with Utzon envisaging a chamber with vaulted ceilings unsupported by pillars or columns.

Large celebrations are planned to ring in its 40th birthday this Sunday, with surf lifesavers, Aboriginal dancers, a harbour flotilla and aerial display.

The Opera House was formally opened by Queen Elizabeth II on October 20, 1973.

George Michael became the first ever pop singer to play a gig at the Paris Opera, with a special gala concert backed by a symphony orchestra for the AIDS related charity Sidaction.
Advertisement
<< US Teens Susceptible to Genital Herpes
Women More Attracted to Low-Pitched Voice Men >>