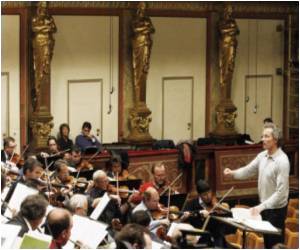 George Michael became the first ever pop singer to play a gig at the Paris Opera, with a special gala concert backed by a symphony orchestra for the AIDS related charity Sidaction.

The British star, on top form and fully recovered from a bout of pneumonia which forced him to postpone his Symphonica tour of the UK and Europe last year, filled the majestic 2,000-seat Palais Garnier, management said.

He performed a selection of his biggest hits and American standards before the swaying crowd, winding up with an explosive finale of "Freedom" and "White Light".


Tickets for the concert went at up to 1,300 euros with a special dinner thrown in. An auction raised 68,000 euros, with a dinner for six with George Michael at his London home bringing in 31,000 euros.
Advertisement
After the show some 250 celebrities met George Michael at the invitation of organisers Line Renaud and Pierre Berge.

Berge, the companion of late fashion designer Yves Saint Laurent and co-founder of Sidaction, declared: "The only vaccine against AIDS is the condom" while singer and entertainer Renaud praised George Michael as having always promoted "sex without risks".

The concert and dinner swelled the coffers of Sidaction by some 289,000 euros.

Oral Health And AIDS
News Archive
News Resource
Advertisement
News Category
How to Reduce Needle Anxiety in Children? Tobacco Addiction: Here's How to Break the Habit Parents are 'Winging It' on Their Kids' Mobile Use Ankle and Ankle Movements While Riding an Hoverboard Is It Healthy to Let Your Mind Wander?
More News
Sign up for Wellness Consult a Doctor Sign up for Selfcare