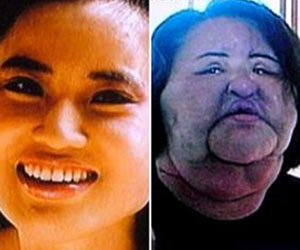 Hang Mioku, a former model, always wished to have soft skin and this turned out to be quite an obsession when she continued to approach doctors for silicone injections.

She was advised to see a psychiatrist as they found that her obsession with soft skin stemmed from low self esteem. Having undergone many cosmetic injections, doctors refused any further cosmetic treatment on her face.

In a desperate attempt, she took to injecting cooking oil into her face after doctors refused to give her any more silicone injections and this has completely disfigured her face. She had first injected a full bottle of black market silicone into her face after which she began using cooking oil. This left her face severely swollen and disfigured that even her family members could not recognize her.


During her modeling days, she became so obsessed with soft and smooth skin that she began to undergo cosmetic procedures to give her a softer skin. She was 28 when she had her first surgery, after which she underwent repeated treatments. These treatments enlarged her face.

After the DIY cooking oil injections, her face was beyond recognition. Now, she is undergoing many corrective surgeries to reduce the swelling on her face and neck. The former model just wants her face to return to normal.

Demand for Cosmetic Surgeries on the Rise Among Men
Tummy tucks for a slimmer figure is found to be extremely popular among men and there has been a 15 ...

Cosmetic Surgeries Performed Overseas Need Revision Surgeries Back Home
It has come to light that cosmetic surgeries performed overseas are not perfect as patients need ......