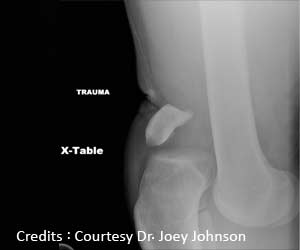 Obesity is drastically increasing in the U.S, which leads to the increase in the rate of knee dislocations, reveals a new study.

The new study included more than 19,000 knee dislocation cases in the U.S. between 2000 and 2012 provides a painful indication of how the nation's obesity epidemic changing the risk, severity and cost of a traumatic injury.

Advertisement
‘Increase in obesity increases the risk of knee dislocation and so do the costs for vascular injury.’


"As the rate of obesity increases, the rate of knee dislocations increases. The total number of patients who are obese is increasing, so we are seeing more of these problems."
Advertisement
Addressing obesity, said co-author Dr. Christopher Born, a professor of orthopaedics at Brown, could therefore help reverse the trends in the data reported in the Journal of Orthopaedic Trauma.

Knee dislocations occur when the knee is badly disrupted because of multiple torn ligaments in the joint. Typically, this happens in vehicle crashes or contact sports like football. But Johnson and Born were inspired to look into the role of obesity because of what they've observed clinically over the last five years: an increase in knee dislocations among obese patients with an increased risk of vascular injury to the main artery that runs down the leg behind the knee.

Moreover, Johnson and Born have seen an increase in "low-energy" causes of dislocations, especially among obese patients. A few years ago, for example, Johnson saw a patient who experienced a knee dislocation after stepping off a ladder while hanging curtains.

To understand what's going on more comprehensively, they analyzed records in the Nationwide Inpatient Sample, a database of patients who've had hospital stays. Over the study period, they found that obese or morbidly obese patients made up an increasing share of knee dislocation patients, rising to 19 percent of patients in 2012 compared to just 8 percent in 2000.

Vascular injury is a particularly severe complication because if undiscovered and untreated, it can lead to amputation of the leg. The team's calculations from the data revealed that the odds of vascular injury during a knee dislocation were twice as high among obese or morbidly obese people than for normal-weight people.

Johnson said this finding is particularly insidious because a common clinical assumption is that vascular injury might be less likely among people suffering a low-energy knee dislocation. He and Born said the new research suggests physicians should be especially vigilant about vascular injury in obese knee dislocation patients, regardless of the cause.

"Orthopaedic and emergency medicine clinicians should have a heightened awareness for the potential of a knee dislocation in the obese patient following a low-energy fall," Born said. "That subset of obese patients who come in with complaints of knee pain need to be carefully evaluated so as not to miss a potentially catastrophic vascular injury."

The stakes, Johnson added, could be the leg itself.

"You don't want to be fooled," he said. "That patient could lose the leg, and their life could be changed forever."

In addition to increased incidence and the likelihood of vascular injury, the researchers looked at the costs of care.

In keeping with that difference, average hospitalization costs were $131,478 for vascular injury cases and $60,241 for those who avoided vascular damage.

Though the data leave off in 2012, which is when Johnson began his residency, he said the trends are quite likely to have remained on track.

"Nothing would lead me to believe that the trend has been halted in any way," he said.

Can Citrus Fruits Protect You from Harmful Effects of Obesity?
The rates of obesity are on the rise, contributing to chronic diseases. Citrus fruits are good ......

Patients Blame Side-Effects of Obesity Drug for Failing to Lose Weight
Obesity drug Orlistat users blamed side effects or the non effectiveness of the drug as the reasons ...