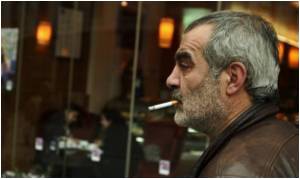 A new test may help in the development of better strategies for smokers to kick the habit.

Scientists said that it provides a much more accurate estimate of exposure than using automated cigarette smoking machines to estimate mainstream smoke deliveries, which traditionally have been used.

"Historically, our knowledge about the amounts of carcinogens, nicotine, and tar produced by cigarettes is based on data from smoking machines," Clifford Watson explained.


"Those machines do not smoke cigarettes in the same way as people. Smokers may inhale large puff volumes or take more puffs per cigarette than the fixed regimen a smoking machine uses. Our method avoids those pitfalls and provides an actual 'mouth level'? rather than a 'machine-level' ? profile of smokers' exposure to the harmful substances in tobacco smoke," he said.
Advertisement
Potential future applications include examining a smoker's daily cigarette-to-cigarette consumption pattern and developing an optimized smoking cessation program based on an individual's pattern.

It would also be possible to develop individualized plans for quitting that are custom-tailored to each individual's smoking pattern to improve cessation rates.

Watson and colleagues based the method on previous research involving a substance naturally present in tobacco called solanesol. During smoking, a fraction of the solanesol deposits in the cigarette filters and serves as a good surrogate "marker" for other compounds in the mainstream smoke that smokers draw in their mouths.

Watson reasoned that measurements of this one compound could be used to gauge a smoker's exposure to numerous other chemicals in the more than 7,000 chemicals present in cigarette smoke.

Their findings indicate that measuring solanesol does provide a quick, inexpensive way to estimate a smoker's total exposure, in a way that more closely reflects their natural smoking habits.

Even cigarettes that are labeled as "low tar" or "light" are unsafe, prompting the U.S. Food and Drug Administration to recently ban tobacco companies from using these terms on cigarette packaging.

"There's no such thing as a safe cigarette," Watson cautioned.

"The only proven means to reduce your health risk from tobacco use is to quit."

Source: ANI
Advertisement
<< Antibacterial Enzyme Found in Tears may Offer Protection Ag...
Casinos Give a Thrust to Tourism in Singapore >>

Smoking Teens At Increased Risk of Suffering from Depression
While many teenagers may grab a cigarette on and off to 'relieve stress' or to simply drive away ......