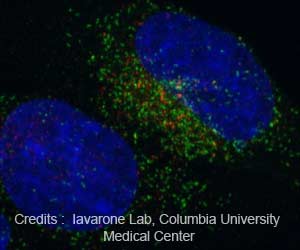 The research team at Columbia University Medical Center (CUMC) have discovered these findings. They have also found that drugs that target this newly identified cancer pathway can prevent tumor growth, both in human cancer cells and mice with a form of brain cancer. The study was published online in the journal Nature.

Advertisement
‘Developing drugs that inhibit FGFR3-TACC3 fusion in glioblastoma tumors can effectively slow down the progression of cancer.’

In a 2012 study published in Science, the CUMC team found that some cases of glioblastoma, the most common and aggressive form of primary brain cancer, are caused by the fusion of two genes, FGFR3 and TACC3. At the time, it was thought that this gene fusion was limited to a fraction of brain tumors, affecting about 300 patients in the U.S. per year.


Since then, however, other researchers have observed the same gene fusion in a percentage of lung, esophageal, breast, head and neck, cervical, and bladder cancers, affecting tens of thousands of cancer patients overall.
Advertisement
"It's probably the single most common gene fusion in human cancer," said study co-leader Antonio Iavarone, MD, professor of neurology and of pathology and cell biology (in the Institute for Cancer Genetics) at CUMC. "We wanted to determine how FGFR3-TACC3 fusion induces and maintains cancer so that we could identify novel targets for drug therapy."

In the current study, the CUMC researchers compared the activity of thousands of genes in cancer cells with and without FGFR3-TACC3. They discovered that the fusion greatly increases the number and accelerates the activity of mitochondria. Cancer cells, which require huge amounts of energy to rapidly divide and grow, can thrive when mitochondrial activity has been amped up.

Using a variety of experimental techniques, the researchers determined that the gene fusion initiates a cascade of events that increases mitochondrial activity.

Activated PIN4 triggers a four-to-five-fold increase in the production of peroxisomes, which release a flood of oxidants. Finally, these oxidants induce PGC1alpha, a key regulator of mitochondrial metabolism, to increase mitochondrial activity and energy production.

"Our study offers the first clues as to how cancer genes activate mitochondrial metabolism, a crucial and longstanding question in cancer research, and provides the first direct evidence that peroxisomes are involved in cancer," said study co-leader Anna Lasorella, MD, professor of cell biology (in the Institute for Cancer Genetics) and of pediatrics at CUMC. "This gives us new insights into how we may be able to disrupt cancer's fuel supply."

Dr. Iavarone suspects that a dual-treatment approach may be needed for patients with FGFR3-TACC3 tumors. In their previous study, the researchers found that drugs that inhibit FGFR3 kinase, an enzyme that helps the protein produced by this fusion gene do its work, increased survival when tested in mice with glioblastoma.

These drugs are now being tested in patients with recurrent glioblastoma that contains the gene fusion by one of the paper's co-authors, Marc Sanson, MD, of Pitié Salpêtrière Hospital in Paris.

"Drugs that inhibit active kinases have been tried with encouraging results in some cancers," said Dr. Iavarone. "But invariably, they become resistant to the drugs, and the tumors come back. However, it may be possible to prevent resistance and tumor recurrence by targeting both mitochondrial metabolism and FGFR3-TACC3 directly."

Based on the findings in this study, the team is now considering the possibility of adding mitochondrial inhibitors into the therapeutic mix for patients in this trial.

The CUMC team is currently testing this dual approach in human cancer cells and animals models.

Glioblastoma Multiforme
Glioblastomas are tumors that arise from astrocytes that make up the supportive tissue of the ......

Patient Survival In Glioblastoma Depends on DNA Modifications
Study shows the distribution of a DNA defect in the glioblastoma genome and its relationship with .....