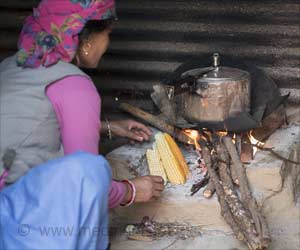 Traditional cookstoves widely used in the rural parts of India emit smoke that can have a detrimental impact on the environment and people's health, finds a study.

The findings showed that the traditional cookstove may be producing much higher levels of particulate emissions than earlier thought.

Advertisement
‘Most of the families in the rural parts of the country use traditional cookstoves with crop chaff or dung and the smoke emitted from it can affect peoples health and the environment.’

"Our project findings quantitatively show that particulate emissions from cookstoves in India have been underestimated," said Rajan Chakrabarty, Assistant Professor at the Washington University in St. Louis.


In some cases, more than twice the emission levels were detected when compared to the previous findings, the researchers said.

"Traditional cookstove burning is one of the largest sources of pollutants in India. We found it's a really big problem; this is revising what people knew for decades," Chakrabarty said.
Advertisement
The results, published in Atmospheric Chemistry and Physics, are based on the series of tests conducted in Raipur -- where more than three-quarters of the families use cookstoves to prepare their meals.

In December 2015, researchers, including those from Pandit Ravishankar Shukla University in Raipur and the Indian Institute of Tropical Metrology in Pune, burned a wide variety of biofuels acquired from different parts of India, cooked different meals in a number of varying ventilation situations.

While further investigation is needed to evaluate the exact effect of cookstove emissions on the climate and health, the researchers noted that their work lays the foundation for further improving the process by which those effects are evaluated and measured.

Lives Saving Project in Nigeria With Clean Cookstoves
Aimed to avert deaths caused by toxic smoke from rudimentary cookstoves, which is among the ......