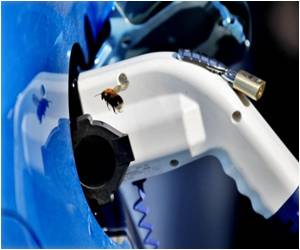 Thousands of Norwegians have switched to electric cars following the example of their crown prince, taking advantage of strong and somewhat controversial government incentives.

For the second month in a row, an electric car topped new car registrations in October in the Nordic country, where 716 Nissan Leaf were sold with an unprecedented market share of 5.6 percent.

Patients with implanted cardiac devices such as pacemakers and defibrillators can safely drive or ride in an electric car without risk of electromagnetic interference (EMI), says a Mayo study.
Advertisement

"Norway is showing the way out of oil dependence, or even addiction," said Snorre Sletvold, president of the Norwegian Electric Car Association.


But others say tax exemptions offered to buyers -- which for one model exceeds the price of the car itself -- is costing the state dearly.

From the modest Buddy, a locally produced two-seater urban car, to the more ostentatious US-made Tesla S, some 15,000 electric cars should be rolling on Norwegian roads by the end of 2013, 10 times more than in neighbouring Denmark and Sweden.

Wirelessly Charging Your Electric Cars Will Soon Become A Reality

In total, they accounted for 7.2 percent of Norwegian auto sales in October, up from a 3.4 percent market share a year ago.

Around 5,200 have been sold in the first 10 months of 2013 and new models by Volkswagen (including an electric version of its famous Golf), BMW and Renault are expected to hit the market in the coming months.

In September, US-made Tesla S, Crown Prince Haakon's personal choice, topped the sales list due to a backlog that had built up before the first cars were shipped to the country.

Somewhat paradoxical in oil-rich Norway, this success can be partially explained by the numerous incentives intended to foster clean vehicle sales in the country.

Regardless of their price range, electric cars are exempt from VAT and other high Norwegian taxes, public parking fees and urban toll payments, and are allowed to use bus lanes.

A lasting success of these cars will "depend on the authorities' decision to keep these incentives in the long run", Norwegian Road Federation executive Paal Bruhn said.

At the moment, an agreement among several political parties guarantees the incentives at least until the end of 2017 or till Norway's electric car pool reaches 50,000 units.

The policy has pitted environmentalism against Norwegians' egalitarian streak: luxurious models like the Tesla S, which costs around 75,000 euros ($101,000), also benefit from exemptions.

According to calculations by the specialised website www.bilnorge.no, tax exemptions for the flamboyant US vehicle could reach 91,000 euros, more than the price of the car itself.

"Thanks to politicians who didn't know what they were doing and Norway's car industry, which has blindly followed its suppliers... we are now assisting an electric car invasion that doesn't have a very social character," two car sector experts said on www.bilnorge.no.

"Tax exemptions were indispensable even for a car like the Tesla," Sletvold replied.

"This model debunks misconceptions of electric cars being ugly, unsafe and with a restricted autonomy."

Bjart Holtsmark, researcher at Statistics Norway, also criticises the incentive policy, highlighting the financial losses for the state, the fossil origin of most electricity produced in the world and the households' tendency to buy a second car instead of using public transportation.

"It would be smarter to use that money on research to develop better batteries."

A car shaped like an egg was created by a team of designers from San Diego. This will help people get around in over-crowded mega-cities.
Advertisement
<< Rare Saudi Sabre Sells for $1 Mn at French Auction
Foods Associated With Weight Management Revealed >>