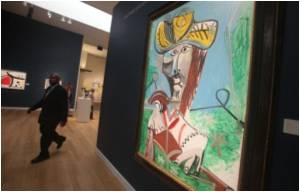 In France, a rare sabre considered a "historic testimony" to the creation of modern-day Saudi Arabia sold for more than $1.2 million at an auction.

The 24-carat-gold and steel sword, with an ivory handle and long curved blade, was bought for 955,400 euros over the phone "by a mysterious buyer who entered bidding mid-sale," said auctioneer Jean-Pierre Osenat.

The sword was a gift from Saudi King Abdul-Aziz bin Saud to Prince Ahmad Shah Khan in Afghanistan to mark the founding of the Kingdom of Saudi Arabia on May 5, 1932.


The sabre, which has a blade nearly 79 centimetres (30 inches) long, was later sold to a private buyer.

It had been valued at between 800,000 and 1.2 million euros ahead of Sunday's auction. The sale provoked "very lively interest among collectors in the Middle East," the Osenat auction house said.
Advertisement
The sabre could be of 19th-century Syrian origin.

"The symbolism of the sabre is important in Arab countries," said Osenat's Jean-Christophe Chataignier.

"To offer a sabre is an act of definite friendship, loyalty, confidence and mutual protection between provider and beneficiary."