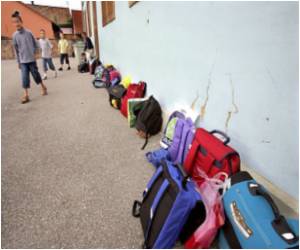 Germany's cabinet Wednesday adopted draft legislation aimed at battling a growing tide of complaints against noisy children, in what is a rapidly ageing society.

The legislation aims to make it easier to build creches in residential areas following a spate of objections against the din of children at play.

Junk Food Should Be Banned in Schools, Playgrounds: WHO

Junk food should not be sold in schools and playgrounds, the World Health Organisation said Friday in a series of recommendations aimed at promoting a healthy diet and cutting child obesity.
Advertisement

Some of these complaints have resulted in kindergartens being refused planning permission or childcare centres having to build noise-protection walls so as not to disturb locals.


Many are from people in their 30s and 40s, including couples with children, worried about the value of their property falling if a noisy new kindergarten springs up nearby, experts say.

Researchers in University of Alberta have found in a study that children in playgrounds aren't at risk from pressure treated wooden playground structures.
Advertisement
In a statement, Environment Minister Norbert Roettgen said: "This is a clear legislative signal in favour of a child-friendly society."

The text of the draft law states that noise emanating from kindergartens, sandpits or playgrounds "is not generally environmental damage."

Just 14 percent of the population is less than 14 years old, compared to 45 percent in Malawi, for example.

Only around 16 percent of households have children, with a recent government study showing that only half of Germans think that having children "enriches" life.

Battlefield That was "Baghdad Island" is Now a Family Playground

Find a Doctor Post-Nasal Drip The Essence of Yoga Drug Side Effects Calculator Nutam (400mg) (Piracetam) Vent Forte (Theophylline) Noscaphene (Noscapine) Indian Medical Journals Iron Intake Calculator Drug - Food Interactions
This site uses cookies to deliver our services.By using our site, you acknowledge that you have read and understand our Cookie Policy, Privacy Policy, and our Terms of Use  Ok, Got it. Close
×