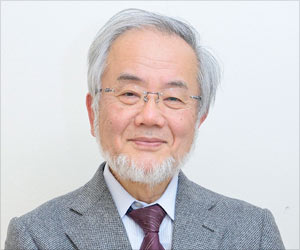 The Nobel Prize in Physiology or Medicine was awarded to Japanese cell biologist, Yoshinori Ohsumi, for his discoveries of the mechanism for autophagy, a process that deals with destruction of cells in the body.

The Nobel Assembly at Karolinska Institutet decided to award the prize to Mr. Ohsumi as his discoveries led to a new paradigm in the "understanding of how the cell recycles its content."

The world's most valuable prize for brain research is being awarded in recognition of their work on the mechanisms of memory.
Advertisement
‘Yoshinori Ohsumi discovered the mechanisms for autophagy, which is the bodys internal recycling program. Autophagy is crucial for preventing cancer, maintaining a healthy metabolism and protecting against diabetes.’

"His discoveries opened the path to understanding the fundamental importance of autophagy in many physiological processes, such as in the adaptation to starvation or response to infection," a statement on the official website of the Nobel Prize said.


The science behind the process called autophagy has led to a better understanding of diseases such as cancer, type 2 Diabetes, and Parkinson's.

The Physiology or Medicine prize, the first of the Nobel prizes awarded each year, is worth 8 million Swedish crowns ($933,000). Mr. Ohsumi is a professor in Tokyo Institute of Technology's Frontier Research Centre.

Malala will be bestowed with Nobel prize on Wednesday, becoming the youngest ever laureate.
Advertisement
Ohsumi's work was described by commentators as "paradigm-shifting" and "pioneering" - included locating the genes that regulate autophagy. This is important for medicine because it helps show why errors in these genes can contribute to a range of diseases.

David Rubinsztein, deputy director of Cambridge University's Institute for Medical Research, said, "Ohsumi had provided scientists around the world with 'critical tools' to help them understand how disrupted autophagy can contribute to illnesses including infectious diseases, cancers and neurodegenerative diseases such as Huntington's and Parkinson's."

Three scientists namely Prof John O'Keefe, May-Britt Moser and Edvard Moser has been awarded the Nobel Prize for physiology or medicine for discovering the brain's GPS system .
Advertisement
<< Make an 'October Resolution' to Not Gain Weight During the ...
Here's the Real Reason Behind Diabetes and Sugar Intake >>

A patience wait for over 20 years is often required by the Noble Prize candidate to receive the highest of scientific accolades.

Loram (2 mg) (Lorazepam) Diaphragmatic Hernia Blood - Sugar Chart Noscaphene (Noscapine) Find a Hospital Accident and Trauma Care The Essence of Yoga Color Blindness Calculator Calculate Ideal Weight for Infants A-Z Drug Brands in India
This site uses cookies to deliver our services. By using our site, you acknowledge that you have read and understand our Cookie Policy, Privacy Policy, and our Terms of Use