Neymar is the Justin Bieber in Football Cleats 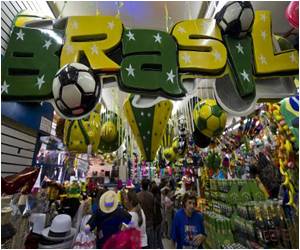 "First comes God, then family and then Neymar," says 17-year-old Rayellen Andrade, wearing the yellow Brazil team jersey with her idol's name across the back.

She's among the tens of thousands of groupies known as "Neymarzetes," who worship the Brazil and Barcelona forward on both sides of the Atlantic as if he were a Justin Bieber in football cleats.

"Neymarmania" is sweeping across Brazil ahead of the team's World Cup last-16 clash with Chile on Saturday.


The face of Neymar, who changed haircuts and hair colour during the tournament before sporting a blond top, is everywhere: On advertising billboards, television commercials and in the hearts of his admirers.
Advertisement
His female fans scream when they see him, collect any Neymar souvenir, scan the Internet for the latest details of his life and talk about him in web chatrooms.

With long reddish hair and nails painted in green, Andrade comes from a middle-class family living in Brasilia.

She has covered her bedroom with posters of the striker. She collects folders filled with newspaper articles about him.

Unable to score tickets for Brazil-Cameroon in Brasilia this week, she went to the pre-game practice hoping to get his attention.

"He knows I exist. My biggest dream is to kiss him and tell him I love him, that if he has a problem I will always be by his side," she says.

Watching the game at home, she welled up after Neymar, the World Cup's joint top scorer, netted in the 4-1 victory.

Her passion for Neymar began five years ago after an epileptic crisis.

"I wasn't interested in any particular player but when I turned 12, I became very sick," she says.

She was unable to walk or go school and risked being paralysed.

Spending hours at home on the Internet, Andrade found comfort in Neymar, who played for Brazilian club Santos at the time.

"I didn't see anybody. I had no friends. I became passionate about him," she says.

"I started reading books, doing searches about him and his family. I bought everything about him. His joy of life took away my sadness of having no contacts," Andrade says.

- Crushed by his departure -

She has overcome her illness but the passion has remained.

"We Neymarzetes must know everything about him to hit back at critics," she says.

She follows the star on Twitter and sends him several messages.

"Sometimes we think that he could spend more time with us but he has to work, he has a son and his family," the fan says.

Neymar knows about the Neymarzete movement and regularly addresses them.

"He responded to one of my messages once during the London Olympic Games. I had written 'good luck, ready to score a goal?' and he replied: 'Not just one, but two.' That night, he scored two goals," Andrade says.

Brazil lost to Mexico in the Olympic final, taking home the silver medal. But Neymarzetes believe he can lead Brazil to a record-extending sixth World Cup.

"He will become the best player in the world back in his homeland," Andrade says.

His transfer to Barcelona last year broke the hearts of many fans who wanted him to keep playing closer to them in Brazil.

"We hoped that he would stay. We were crushed when he announced his departure," Andrade says. "But then he did an interview in which he said 'I will never abandon my Neymarzetes.'"

Andrade has a boyfriend but she insists he's not jealous of her crush.

When it comes to Neymar's model-girlfriend, Bruna Marquezine, Andrade tries to be gracious.

"I like her happy. When we have to take her somewhere for Neymar, I go with her," Marlene Andrade says.

But she has set ground rules.

"At school, during breaks, I look at Neymar stuff but I have to work during classes," Rayellen says. "My mother said, 'If you don't have a passing grade, Neymar is over.' So I study hard."

World Cup Proving to be a Success for Brazil Both on and Off the Pitch
The Brazilian government revealed that the competition is also proving to be a success off the ......