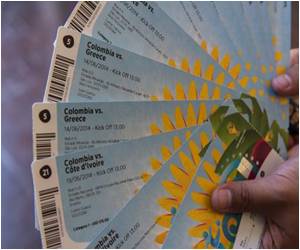 Usually, it is the sound of drums that moves the musicians and dancers of Mangueira, a hillside favela with a dizzying view over the city.

This time, it was Brazil's penalty shootout victory over Chile in the first knock-out game of the World Cup that made their heart beat.


"It was very tough, but victory tastes even better, the emotion is stronger," said Rodrigo, 33, who sported the same blond-dyed haircut as Brazil right-back Dani Alves.
Advertisement
He kissed the green and pink flag of his 86-year-old samba school, which is based in the slum and is one of the top competitors in Rio's annual carnival.

"At one point, I thought we were going to lose, but it's Brazil and we have the best goalkeeper in the world," he said, referring to Julio Cesar, who stopped two penalties, sending Brazil to a quarter-finals showdown against Colombia.

"It's not yet time to think about the quarter finals. It's time to party," he said.

The school's headquarters, at the foot of the favela, was turned into a screening room for residents who all wore Brazil's yellow flag.

After extra-time ended in a 1-1 tie, some were unable to look as the penalty shootout began.

"My heart is beating at 1,000 kilometers per hour but we can only pray. Penalties are like the lottery," said Mario Cesar just before the spot-kicks started.

The room that normally vibrates with the sounds of samba went silent as the players geared up for the penalties.

When the last Chilean kick hit the post, the crowd roared and jumped in the air. Some sighed in relief, others teared up after the nerve-wracking penalty session.

It was a great moment of joy in a favela that was once a stronghold of drug traffickers until 260 marines and elite police officers seized control in June 2011.

"I'm very happy now. We are in the quarter finals. I love it," shouted Patricia as she danced with friends.

Roberto, 34, was disappointed with the performance of the team.

"The goalkeeper saved us but I believed that we would win. I was very scared. The game was tight, without midfield play, and everything was on Neymar's shoulders. The players were soft," he said.

Outside the school, police kept their distance. Relations with police officers have been rocky because residents were caught in the crossfire of shootouts with gangs in 2011.

The favela is calmer since then, with a Police Peacekeeping Unit (UPP) stationed in the slum.

The "pacification" campaign in Rio favelas has created a security perimeter around the city's Maracana Stadium, which will host the July 13 final, and the 2016 Olympic Games.

Among the Mangueira crowd was a Frenchman, Dan, who brought his 13- and 11-year-old sons to watch the game at the samba school.

"I came here for carnival and I saw that it was the heart of Brazil that beat in Mangueira," he said. "What tension! The kids were screaming. They became Brazilian."

Football can Help Middle-Aged Women Keep Their Blood Pressure in Check
While football is usually seen as a man's game, playing it can help reduce blood pressure among ......