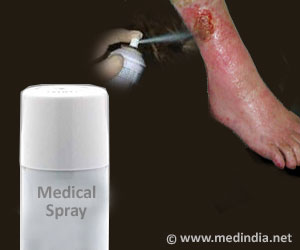 Researchers from Northwestern University claim the regenerative bandage promotes healing four times faster than a traditional bandage, and promotes a more natural healing process, without unnecessary and dangerous side effects.

Valuable information on diabetic foot care, treatment and prevention.
Advertisement
‘The regenerative bandage which has antioxidant properties and is composed of a thermo-responsive, biocompatible material promotes wound healing by mimicking the bodys innate healing response and can be easily removed.’

Because of diabetic neuropathy or nerve damage, diabetic patients can injure their feet without knowing it, and even superficial wounds can be slow to heal because of poor circulation associated with diabetics' condition. Chronic diabetic foot ulcers, which can be notoriously difficult to treat, affect 15% of diabetic patients, causing severe pain and a reduction in quality of life. In the most severe circumstances limb amputation is required. In 2010, 73,000 lower-limb amputations unrelated to traumatic injury were performed in adults diagnosed with diabetes, reported the American Diabetes Association.


"Foot ulcers cause many serious problems for diabetic patients," said Guillermo Ameer, professor of biomedical engineering in the McCormick School of Engineering at Northwestern, in a press release."Some sores don't heal fast enough and are prone to infection. We thought that we could use some of our work in biomaterials for medical applications and controlled drug release to help heal those wounds."

Six Staggering Diabetes Facts
Advertisement
Ameer and his team conducted a study, recently published in the Journal of Controlled Release, in which they developed an approach to diabetic wounds that "mimics the repair process" in healthy bodies. The regenerative bandage is composed of a thermo-responsive, biocompatible material, which when applied to the wound as a liquid, solidifies into a gel at body temperature.

The researchers incorporated a protein, called stromal cell derived factor-1, into the gel. The human body innately uses this protein to elicit the return of repair cells (stem or progenitor cells) to the site of injury, where they produce new blood vessels, thus increasing blood flow and promoting wound healing. The slow release of this protein from the biocompatible material mimics the body's innate healing response.

According to Ameer, the proteins used in the dressing are similar to ones a healthy body would use to heal itself. In their experiments, the researchers found that applying the proteins directly did not work as well as controlled release.  Also, the gel-form molds itself directly to the wound, but it is more easily removed than traditional paper or cloth dressings.

"The ability of the material to reversibly go from liquid to solid with temperature changes protects the wound," Ameer explained. "Patients have to change the wound dressing often, which can rip off healing tissue and reinjure the site. Our material conforms to the shape and dimensions of the wound and can be rinsed off with a cooled saline, if needed. This material characteristic can protect the regenerating tissue during dressing changes."

Recent developments in wound dressing technology have led to a "smarter" bandage. MIT scientists recently introduced "smart" wound dressing technology that delivers medicines, monitors temperature, and lights up if its drug supply is running low. Also, a research team at the University of North Texas has designed a skin cancer treatment that is placed directly over cancerous lesions for a more individualized and convenient approach to squamous cell carcinoma treatment.

Water fluoridation with sodium fluoride could be a contributing factor to diabetes, as the chemical is a known preservative of blood glucose.