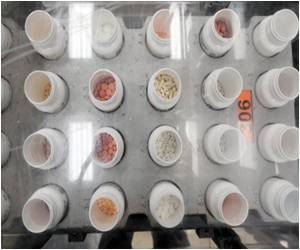 When the pharmaceutical industry develops new medicines, it is very important to have detailed knowledge of the body's molecular response to the medicine, for example for cancer treatment medicines.

"With a better knowledge of the many complex processes which are activated in connection with illness and medication, the better the possibility of developing new drugs. We have now moved closer to targeting and treating certain cancers using the so-called PARP inhibitors - medical inhibitors used in the latest types of cancer treatment. Certain types of tumours rely heavily on PARP proteins in order to self-repair, and PARP inhibitors can be used specifically to kill cancer cells," says Michael Lund Nielsen, Associate Professor at The Novo Nordisk Foundation Center for Protein Research, University of Copenhagen.

The researchers have developed an advanced method for identifying the proteins which are modified with ADP-ribosylation - a biological modification affecting a cell's ability to repair DNA damage. The research findings have just been published in the scientific journal Molecular Cell.


The forms of cancer causing most deaths among women are lung cancer, breast cancer, colon cancer, pancreatic cancer and ovarian cancer. PARP inhibitors appear to be an effective treatment for hereditary breast and ovarian cancer, but little is known about the treatment details. Our new analysis method can help shed light on precisely how the PARP inhibitor treatment is working because it can offer us more knowledge about the biological function of PARP proteins. In the long term, it will enable us to design better and more precise PARP inhibitors, says Michael Lund Nielsen, Associate Professor at the Novo Nordisk Foundation Center for Protein Research.
Advertisement
DNA repair crucial for cell health

Every day, our DNA is exposed to damage which our healthy cells are capable of repairing and thus keep healthy. But the ability of certain cancer cells to repair their own DNA damage is impaired compared to standard cells and this is exploited using PARP inhibitors which block the repair systems of cancer cells. In principle, PARP inhibitors both damage healthy and cancer cells, but normal cells have different survival mechanisms in comparison to cancer cells. PARP inhibitors therefore appear to offer new and much improved cancer treatment options.

PARP treatment is a new and individualised type of cancer treatment. It is a so-called targeted treatment which exploits a weakness inherent in cancer cells. PARP inhibitors have yet to be marketed, but many companies are testing them in clinical (phase 1-3) trials. So far, the PARP inhibitors are only available for experimental purposes.

Using radiation and chemical compounds, the researchers started by damaging the DNA in cells. They then isolated proteins modified with the ADP-ribosylation and identified them using mass spectrometry, a technique making it possible to determine a protein's identity and the sites where the ADP-ribosylation chemical changes occur.

ADP-ribosylation is a biological protein modification controlling several key cellular processes, such as the repair of DNA damage. Every day, our DNA suffers damage between one thousand and one million times and it is therefore crucial that the cells can repair their DNA. Certain cancer cells are incapable of self-repair without ADP-ribosylation and this can be exploited for targeted cancer treatment via PARP inhibitors. By inhibiting the PARP proteins that perform ADP-ribosylation, it is thought that these cancer cells are prevented from self-repair and will therefore perish.

PARP is a group of DNA repair proteins that play an important role in some cancers as certain types of tumours are highly dependent on PARP in order to repair themselves. These tumours are therefore vulnerable to targeted treatment using PARP-inhibiting compounds. PARP inhibitors block the DNA repair system of cancer cells, but few details are known about the molecular aspects surrounding the PARP inhibitors, including which proteins are affected by them. The researchers' new analysis method makes it possible to map the movement of PARP inhibitors, which enables optimised treatment with fewer side effects.

Proteins are chain-shaped biological macromolecules built up of amino acids. The cells are predominantly controlled by proteins, and many of the characteristics of the protein functions are controlled by, among others, molecular modifications that can be attached to amino acids. Functions that are controlled by protein modifications include: the localisation of proteins at specific locations in the cell, the marking of proteins for degradation and the turning on/off of the biological activity of the protein. Studies of the modifications that proteins contain are therefore important for understanding a wide range of cellular processes.

Improved Tests for Liver Toxicity Could Introduce Safer Medicines for Patients
How many drugs in reality manage to actually reach patients after clinical trials tag them with a .....

Better Tests for Liver Toxicity Would Mean Safer Medicines
When the drug actually was quite safe, how many breakthrough new drugs never reach patients because ...

Century Old Henry Ford's Ideas may Cut the Cost and Speed Production of Medicines
Ideas that Henry Ford taught a century ago about the advantages of continuous mass production are .....