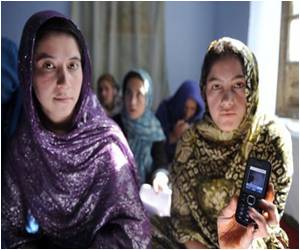 The phone is called Ustad Mobile (Mobile Teacher) and provides national curriculum courses in both national languages, Dari and Pashto, as well as mathematics.

A survey has revealed that around 57 percent of Australians lack the knowledge about the medicines which is claiming their lives.
Advertisement

All the lessons are audio-video, with writing, pronunciation and phrases installed in Ustad Mobile phones -- and they are distributed free to students.


Sat on a carpet in a small Kabul classroom with a handful of women learning to read and write, 18-year-old Muzhgan Nazari said the Taliban, who banned schooling for girls during their rule, were in power when she should have started her education.

One in three older people who have difficulty reading and understanding basic health related information may be at increased risk of death, says a new study.
Advertisement
"I could not go to school because the Taliban took control of Kabul city", she told AFP, adding that her father had also opposed his daughters attending school.

"Since I heard about this literacy training centre for women, I convinced my father and he allowed me to attend on a daily basis," she said.

Nazari is delighted with the programme, which is being rolled out by a commercial provider and the ministry of education with financial backing from the United States.

The Mobile Teacher software was developed by Paiwastoon, an Afghan IT company, with $80,000 dollars in US aid and is designed to tackle one of the worst illiteracy rates in the world by riding the growing wave of mobile phone use.

"This is the first time audio-visual literacy learners have the chance to receive lessons on their cellphones," Mike Dawson, CEO of Paiwastoon, told AFP.

The company has experience in the field, having previously managed the "One Laptop Per Child" programme that handed out 3,000 computers to women and children in Kabul, Kandahar, Herat, Baghlan and Jalalabad.

"We can make the job of the teachers easier by using the video and the audio and the questions and exercises," Dawson said.

"Cellphones are cheaper than any computer and people are familiar with it. And also, the maintenance is much easier."

The free app can be installed on all mobile phones with a memory card slot and a camera. Individual lessons, which will also be made available on the ministry of education website, will teach new words and phrases.

"We try to get to as many people as possible. The other thing, we can add more subjects like English, Arabic, Pashtu, health, agriculture," Dawson added.

"For rolling out Ustad Mobile -- we are looking to talk with the phone companies and the media to make people aware of the programme.

"We interviewed phone shop owners about the software and they are willing to install it for people like they install other software on mobiles," Dawson said.

"People don't realise how powerful these phones are, they work like computers."

At the moment, some 100 students are using the Mobile Teacher in a pilot project in Kabul, 65 percent of them women, with plans to roll the project out across the country, the education ministry said.

"Our focus and target is mostly on uneducated women," said director of programmes, Allah Baz Jam.

The ministry would do everything it could to promote the Ustad Mobile for women and would also distribute the software on CDs and DVDs, he told AFP.

At the pilot project class in Kabul, Samira Ahmadzai, a 24 year-old mother of two, wearing an all-enveloping burqa also said she had been unable to attend school because of the Taliban.

"And later, I got married. Now with the permission of my husband, I've come to the literacy centre to learn to read and write."

The Taliban were ousted by a US-led invasion in 2001, and have since waged an insurgency against the Western-backed government of President Karzai.

But US-led NATO troops will withdraw from Afghanistan by the end of 2014, and rights activists fear that some of the gains made by women in the past decade could be lost as Taliban pressure on the government increases.

For now, though, the Mobile Teacher is bringing new hope to those who missed their chance of an education in the past.