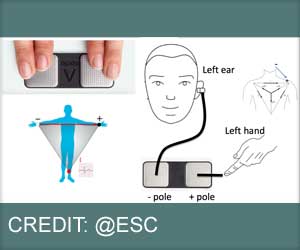 A new electrocardiogram (ECG) which makes use of signals from the ear and hand to check heart rhythm has been revealed at EHRA 2011 a European Society of Cardiology (ESC) congress. The ECG does not require two hands and could be used by drivers, athletes, and the military.

Study author Dr Raffaele De Lucia, of the University Hospital of Pisa, Italy, said: "All commercially available portable ECG devices require both hands, but what if symptoms happen while driving?"

This is the first study to show that the ear can be used for ECG signal detection. The study included 32 consecutive healthy volunteers (cardiology students and nurses). An ECG was first performed by the standard method, which uses the index and middle finger of each hand. A second ECG was conducted using the index and middle finger of the left hand and a clip attached to the left ear. (See figure.)


All ECGs were printed and analysed by the device and by two cardiologists who were blinded to which method had been used. No differences were detected in the ECG results obtained by the two methods.
Advertisement
Dr De Lucia said: "We have shown how the ear can be used as an innovative anatomical site for ECG signal detection in healthy adults. We are now conducting further studies to validate this method in patients with cardiac arrhythmias."

The authors said the findings pave the way for a new kind of single lead ECG wearable device which leaves one hand free, making it easier to use. In addition to detecting previously undiagnosed atrial fibrillation, the device could be used to evaluate physical performance during exercise, prevent fainting, and check the heart during symptoms including dizziness and breathlessness. Patients already diagnosed with cardiac conditions such as atrial fibrillation could also use it to monitor their condition.

Electrocardiogram
An ECG is a diagnostic test that records the electrical activity of the heart and helps to detect .....

ECG Rhythm and Airway Management Make All the Difference During a Heart Attack, Says Study
New study finds the link between use of advanced airway management and ECG rhythms indicating the .....

Top 11 Health Benefits of Cocoa powder
Cocoa provides a plethora of health benefits, but many people are unaware about the advantages of a ...