New Approaches to Enhance Behavioral Therapy in Children With Autism 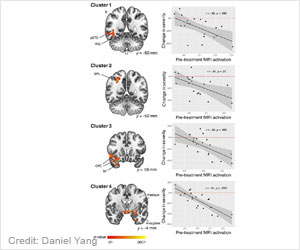 Two new approaches have been identified by researchers to help children with autism spectrum disorder through behavioral therapy. The methods are published in two scientific papers.

The first paper, "Brain Responses to Biological Motion Predict Treatment Outcome in Young Children with Autism," found that functional MRIs (fMRI) could predict which children will benefit from Pivotal Response Treatment (PRT), one of a few evidence-based interventions for the condition, with near-perfect accuracy.

Autism is a neurodevelopmental disorder typically characterized by impaired social and communication skills combined with repetitive movements.
Advertisement
‘Administration of oxytocin to children with autism spectrum disorders could help reinforce the reward system in the brain that motivates social behaviors. ’
Tweet it Now

Researchers from the George Washington University and the Children's National Health System used fMRI to determine the functionality of four clusters in the brain that are involved in processing emotional information, social information, social attention and social reward. According to the study, children with higher functionality in those brain clusters benefitted more from PRT.


The behavioral therapy is currently effective in approximately 60 percent of children and is costly and time-intensive. Functional MRI could be used to identify the children most likely to respond to the treatment and may lead to follow-up research to better prepare those who would not.

The Autism Glass Project is an interactive learning experience that uses machine learning for feature extraction, allowing the device to detect "action units" from faces.
Advertisement
"Parents want their children to receive the best treatment during this period, but it is not always clear how much a given treatment plan would benefit the children," said Daniel Yang, researcher at the GW Autism & Neurodevelopmental Disorders Institute, assistant research professor of pediatrics at the GW School of Medicine and Health Sciences and Children's National, and one of the lead authors of the paper. "Although more research is needed, the current research provides an important first step toward establishing objective biomarkers that can accurately predict treatment outcome in young children with autism."

The second paper, "Intranasal Oxytocin Enhances Connectivity in the Neural Circuitry Supporting Social Motivation and Social Perception in Children with Autism," examined the effect of the hormone oxytocin on the activity of social perception and reward brain circuits in children with autism spectrum disorder. This was one of the first investigations of its kind.

Researchers found that by administering oxytocin as a nasal spray before social experiences, children had stronger responses to the social information. The findings suggest that use of oxytocin treatment before behavioral therapy could help reinforce the reward system in the brain that motivates social behaviors. However, researchers stress that the treatment must be developed in conjunction with therapies designed to positively reward social behaviors, as heightened response to negative emotions can also occur.

"Although oxytocin is often referred to as the 'love' hormone, its effects actually depend on a child's social surroundings," said Allison Jack, assistant research professor of pharmacology and physiology at the GW School of Medicine and Health Sciences and a co-author of the paper. "Our study demonstrates that administering oxytocin to children with autism spectrum disorders has different effects on their brains depending on what type of environment they are exposed to. Only when children were experiencing positive social cues (like happy voices) did we see oxytocin having the effect that we would need it to have for therapeutic use, by increasing brain activity in the reward system."

While the researchers said the results are promising, they do not suggest that using intranasal oxytocin should be considered as a core treatment for autism. Rather, the oxytocin treatment could be a way to enhance behavioral methods that are specifically tailored to provide positive social experiences and rewards.

The sample sizes of both studies were small, but the results were striking. The findings have the potential to complement each other, according to one of the corresponding authors.

"This research moves us closer to our goal of developing precision treatments for people with autism--getting the right treatment to the right person at best time," said Kevin Pelphrey, Carbonell Family Professor in Autism and Neurodevelopmental Disorders, director of the GW Autism and Neurodevelopmental Disorders Institute, a collaboration between GW and Children's National, and a co-author of both papers. "As we move forward from here, we will launch a new era--brain imaging will become a routine part of a translational research chain. Brain imaging biological markers could be used, at the outset, to make treatment decisions related to dose, duration, intensity and specific behavioral treatment approaches, as well as decisions about which drugs to use to improve treatment response."

The papers were published in Translational Psychiatry and Scientific Reports, respectively.

Researchers identified a specific blood marker that can be used to predict which patients have the best chance to respond to the treatment.
Advertisement

Mindfulness meditation is awareness of actuality and being in a non-judgemental state. It gives peace of ...