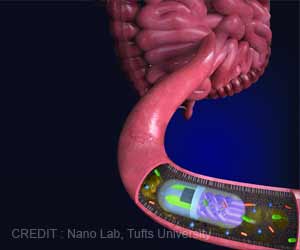 A research team led by Tufts University engineers has developed a 3D printed pill that samples bacteria found in the gut -- known as the microbiome -- as it passes through the gastrointestinal tract (GI). The ability to profile bacterial species inhabiting the gut could have important implications for the diagnosis and treatment of conditions that are affected by the microbiome, according to the researchers.


‘Newly developed 3D pill is the first known working device capable of non-invasively and accurately assessing the profile of bacteria in the gut. Thus, the 3D pill can sample the gut microbiome, thereby improving diagnosis and treatment.’

The 3D printed pill described in the journal Advanced Intelligent Systems represents the first non-invasive diagnostic tool capable of providing a profile of microbiome populations throughout the entire GI tract, according to the researchers. Current methods of sampling the microbiome involve analysis of fecal DNA and metabolites, but that approach provides little information of the environment upstream of the distal colon, where bacterial species can vary significantly.

The pill has been studied and found to provide accurate identification of bacterial populations and their relative abundance in both in vitro and in vivo applications, the paper says. It has been tested in pigs and primates, yet clinical trials will be needed to determine if the pill can be used routinely in humans for clinical care.

More than 1,000 species of bacteria can inhabit the gut. The vast majority of these bacteria have a beneficial, supportive role in digestion and protection against disease. When the natural balance of the microbiome is skewed, a condition called "dysbiosis" occurs, which can be associated with inflammation, susceptibility to infections, and even the exacerbation of other diseases such as cancer. Research is increasingly unveiling specific microbiome metabolites that have beneficial or protective effects for the host against disease.

"We are learning quite a lot about the role of gut microbiome in health and disease. However, we know very little about its biogeography," said Sameer Sonkusale, professor of electrical and computer engineering at Tufts University's School of Engineering and corresponding author of the study. "The pill will improve our understanding of the role of spatial distribution in the microbiome profile to advance novel treatments and therapies for a number of diseases and conditions."

The pill is more sophisticated than just a sponge. It is manufactured in a 3D printer with microfluidic channels that can sample different stages of the GI tract. The surface of the pill is covered with a pH-sensitive coating, so that it does not absorb any samples until it enters the small intestine (bypassing the stomach) where the coating dissolves. A semi-permeable membrane separates two chambers in the pill - one containing helical channels that take up the bacteria and the other containing a calcium salt-filled chamber. The salt chamber helps create an osmotic flow across the membrane, which pulls the bacteria into the helical channels. A small magnet in the pill enables one to hold it at certain locations in the gut for more spatially targeted sampling using a magnet outside the body. A fluorescent dye in the salt chamber helps locate the pill after it exits the GI tract.

"The design of this device makes it incredibly easy to use, posing little risk to the subject being measured, yet providing so much information," said Giovanni Widmer, professor of infectious diseases and global health in Tufts Cummings School of Veterinary Medicine, and co-author of the study responsible for exploring the pills effectiveness in animal studies. "Compared to other non-invasive diagnostic devices, this is like having an EKG for gut health."

The researchers see this technology as bridging an important gap in gastrointestinal diagnosis. "We have incredible technology to analyze bacterial populations using DNA sequencing techniques, but until now have not had a way to sample bacteria throughout the GI tract in a way that was not invasive," said Hojatollah Rezaei Nejad, a post-doctoral fellow studying novel applications of 3D printing in Sonkusale's laboratory at Tufts and lead author of the study. "By sampling non-invasively, this pill could help us better identify and understand the role of different bacterial species in health and disease."

Novel ingestible Jell-O-like pill quickly expands on reaching the stomach and uses an embedded sensor to potentially track ulcers, cancers, and other intestinal diseases over an extended period of time.

A camera on the end of a flexible, steerable rod is inserted into the patient's throat or rectum to image the upper or lower gastrointestinal duct.

The bacteria that live in the gut offer numerous health benefits such as synthesis of vitamin K, boosting immunity and metabolism of bile acids.

Antibiotics are among the most used and abused medications. This article explains some general features about antibiotics.

Leaky gut syndrome is a condition caused by increased intestinal permeability of the gut. It resembles the symptoms of irritable bowel syndrome, characterized by excessive gas production and bloating.

MRSA infection is the most dreaded hospital or community acquired infection that can become life threatening.

Probiotics are live microorganisms that resemble the good bacteria in our gut. Science is yet to fully explore the healing potential of probiotics; meanwhile some studies have ruled in their favor.