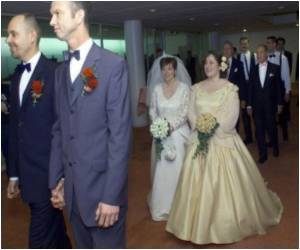 The Netherlands celebrated the 10th anniversary of the world's first gay marriage.

"I declare you, in my position as mayor of Amsterdam, joined by the rights of marriage," Eberhart van der Laan told Jan van Breda and his partner Thijs Timmermans at the Museum of History in the heart of Amsterdam.

Poll Finds Majority in US Back Gay Marriage

A new poll has found that a majority of Americans say they are in favor of same-sex marriage, reflecting shifting US sentiment on the issue.
Advertisement

The happy couple, dressed in dark formal suits with a mauve shirt for one and black T-shirt for the other, turned up for the ceremony on foot, with van Breda holding a red balloon in the shape of a heart carrying the figure '10.'

"It is exactly 10 years ago today that the first same-sex marriage was celebrated by my predecessor," he added.

Same-sex couples may be allowed to have civil partnership ceremonies in places of worship if the British government succeeds in changing the law.
Advertisement
On that occasion, it was Helene Faasen and Anne-Marie Thus who walked down the aisle into the history books as the world's first legally wed lesbian couple, alongside three pairs of grooms.

"I was not in office then, but I remember that as a citizen of the Netherlands, as an Amsterdammer, it made me very proud," van der Laan told AFP.

"It is a symbolic, special day," Thijs Timmermans said. "The Netherlands is the first country where gay couples can marry. I'm proud of that, it should be normal.

"It is a pity that all those people in all those other countries still have to live undercover. It is not about being homosexual, it is about loving one another."

The Netherlands was the first country to legalise same-sex marriage, in 2001. Faasen and Thus, both in traditional, flowing wedding gowns, exchanged the first vows alongside three all-male pairs in Amsterdam on April 1 that year before then mayor Job Cohen.

"We married for love, not politics. But of course we were aware it was an historic moment," 41-year-old Thus, a notary assistant and gay rights campaigner, told AFP ahead of Friday's anniversary.

By tying the knot in front of the world's press, "we wanted to make other people think about how horrible it is to be denied something that is a natural right for others," added her wife, 44-year-old notary Faasen.

Since then, nearly 15,000 gay and lesbian couples have wed in the Netherlands -- about two percent of the total number of marriages registered between 2001 and 2010, based on figures from the Central Statistics Bureau.

According to the Amsterdam-based COC, the world's oldest homosexual advocacy group, there are about a million gay, lesbian, bisexual and transgender people in the Netherlands out of a total population of 16.7 million.

To celebrate the landmark anniversary, an exhibition was opened at an Amsterdam hotel on Friday of a selection of photographs of same-sex marriages.

After presiding over the wedding of van Breda and Timmermans, mayor van der Laan also wed two women in a private ceremony. On Friday evening, the city was to host a special reception with guests including the ambassadors of those countries that have legalised gay marriage.

"Legal gay marriage has been our most beautiful export product," the COC said Thursday in a letter addressed to the Dutch government and parliament, but warned that "all rights are still not completely equal".

In the letter, the organisation denounced the fact that certain Dutch officials still refused to preside over same-sex marriages.

The US Supreme Court on Tuesday let stand a law authorizing homosexual marriage in Washington, DC rejecting a challenge from anti-gay activists.
Advertisement
<< Bed Bugs Cannot Stand the Smell of Pheromones
1 in 100 Men Allergic To Their Own Semen >>

Find a Doctor Noscaphene (Noscapine) Sinopril (2mg) (Lacidipine) Daily Calorie Requirements Vent Forte (Theophylline) Accident and Trauma Care The Essence of Yoga Blood - Sugar Chart Iron Intake Calculator Find a Hospital
This site uses cookies to deliver our services. By using our site, you acknowledge that you have read and understand our Cookie Policy, Privacy Policy, and our Terms of Use