Poll Finds Majority in US Back Gay Marriage 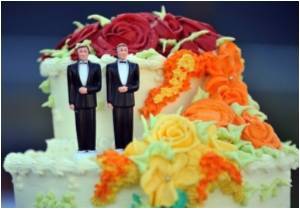 A new poll has found that a majority of Americans say they are in favor of same-sex marriage, reflecting shifting US sentiment on the issue.

Fifty-three percent of Americans support gay marriage, up more than 20 percentage points from a low of 32 percent in 2004, the poll of 1,005 adults conducted over four days last week for ABC News and the Washington Post found.

Gary Langer of Langer Research Associates, which produced the poll, called the findings a "milestone result that caps a dramatic, long-term shift in public attitudes."


It was the first time that the ABC News-Washington Post poll, which has asked the same question since 2003, had shown a majority of American favoring same-sex marriage, the Post said.
Advertisement
It said other polls conducted by Pew Research Center, the Associated Press and CNN had found similar trends.

Five years ago, only a majority of people younger than 30 supported gay marriage, but now majorities of those in their 30s and 40s do, the poll shows.

Republicans oppose gay marriage by a ratio of two to one, and evangelical white Protestants, a core conservative group, are opposed to same-sex unions by three to one, an analysis of the survey's findings says.

Gay marriage is legal in five US states and the capital, Washington, and a handful of other states allow same-sex civil unions.

The Obama administration late last month said it would no longer defend the constitutionality of the Defense of Marriage Act, a 1996 law banning federal recognition of gay marriages, but the Republican-led House of Representatives has vowed to fight the president's decision in the courts.

Source: AFP
Advertisement
<< Secrets of Brain Disease may be Uncovered Via 'Bilingual' N...
Study Says Kidney Cancer Patients Who Have Partial Organ Re... >>