Need for Transparency In AIDS Funding, Urged by Bill Clinton 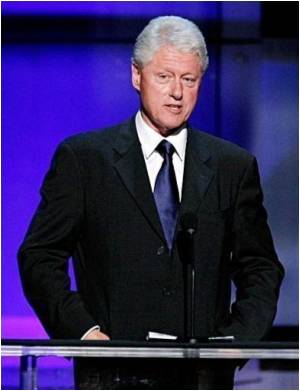 Donors will carry on funding in response to the world AIDS crisis even with global financial woes said former US president Bill Clinton. He also urged greater transparency by every one involved.

Clinton, who works to provide low-cost HIV medications to foreign nations through his Clinton Foundation, spoke at the closing ceremony of the 19th International AIDS Conference in the US capital.

"If we all keep producing results I believe the money will be there. And I am committed to doing whatever I can to see that it does. We do have to prove over and over again that we are making the most of the money," he said.

AIDS was first detected in early 1980s, among gays, Haitians and black Africans. HIV is a descendant of a Simian Immunodeficiency Virus.
Advertisement
He also noted progress in bringing down the cost of treating people with HIV worldwide, which was about $1,000 per year per person in 2003 according to UNAIDS but is now about $200 per person annually.

But he also called for changes to the system, saying that money could be spent more effectively and should not be influenced by political interests.

"We can target the money we are spending more effectively," Clinton told the gathering of 24,000 scientists, advocates and policy makers.

"This may be somewhat controversial but I feel strongly about it. We need a new level of openness about how every last dollar is spent -- by countries, by donors, by NGOs," he said.

"You can't expect program managers all over the world to make the smartest decisions if they are trapped in a financial black box," he added.

"Not so somebody can be embarrassed, but so we can see who is doing better and the rest of us can copy."

Clinton acknowledged the conference was being held in the US capital where an epidemic is raging -- particularly among the city's black residents -- that is comparable to some hard-hit countries in Africa.

The former Arkansas governor also said the AIDS crisis was particularly acute in the US south.

"I'm sad to say since it is my home region that there is still too much stigma," Clinton said.

"It is embarrassing for me to think stigma against people with HIV exists anywhere in America."

Clinton called for investments to be "based on evidence, not the politics and vested interests that too often drive spending decisions."

Earlier this week Secretary of State Hillary Clinton pledged new US funding for HIV/AIDS and told the meeting the United States is committed to the notion that an "AIDS-free generation" can be achieved.

UNAIDS said earlier this month that global spending on AIDS rose 11 percent from 2010 to 2011, helping another 1.4 million poor people on AIDS drugs, bringing the tally to a record of more than eight million, or 54 percent of those in need.

But there was a funding gap of $7 billion, half of it in sub-Saharan Africa, home to 69 percent of the 34 million people living with HIV.

Spending by the United States and other Western countries, together with philanthropists and agencies such as the Global Fund to Fight AIDS, TB and Malaria has remained almost unchanged since Western economies were hit by the financial crisis in 2008.

Vent Forte (Theophylline) Turmeric Powder - Health Benefits, Uses & Side Effects Blood Donation - Recipients How to Reduce School Bag Weight - Simple Tips Drug - Food Interactions Find a Hospital The Essence of Yoga Post-Nasal Drip Drug Interaction Checker Pregnancy Confirmation Calculator
This site uses cookies to deliver our services. By using our site, you acknowledge that you have read and understand our Cookie Policy, Privacy Policy, and our Terms of Use