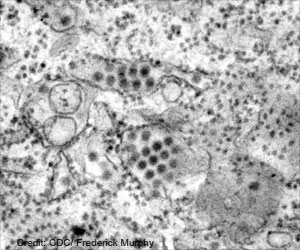 Attempts at using live dengue viruses to develop a dengue fever vaccine have often led to an imbalance in immunity to the four dengue serotypes--for instance, one recent candidate had lower efficacy against serotype 2. Previous infection with one serotype of dengue, or protection against just one serotype, can lead to more severe disease if a person contracts other serotypes, so it's vital that vaccines are available that specifically target all four strains.

Dengue can be easily prevented and managed if you follow proper precautionary measures. Here we give you the most important dos and don'ts for dengue fever.
Advertisement
‘New finding forms the basis of a safe and efficacious dengue virus candidate.’

To create a new dengue virus vaccine, Stefan Metz, Shaomin Tian in the laboratories of Aravinda de Silva, Chris Luft and Joe DeSimone at the University of Carolina, Chapel Hill, USA designed nanoparticles of various shapes and sizes using Particle Replication in Non-wetting Template (PRINT) technology. Each nanoparticle was studded with copies of DENV2-E protein, a key protein from serotype 2 of the virus. Then, the researchers immunized 31 mice with a control injection or one of five different formulations of the nanoparticle, each with different size particles ranging from 55x70 nanometers to 200x200 nanometers. During the course of the immunizations, as well as four times after two boosters had been given, the researchers drew blood from the mice to follow their immune responses. Bone marrow and lymph node samples were also taken at various points after immunization.


After immunization with the DENV2-E nanoparticles, mice had a specific antibody response to serotype 2 of the dengue virus, but not the other three serotypes. Compared to mice vaccinated with only the soluble DENV2-E proteins, the nanoparticle formulations led to a stronger immune response. Although previous studies of similar nanoparticles have found an effect of nanoparticle shape and size on antibody responses, such a trend was not seen at significant levels for the DENV2-E vaccine. Future studies will be required to test whether the antibody levels prevent dengue infection as well as whether similar nanoparticles can be develop for all dengue serotypes.

"In addition, this platform can be used to develop safe vaccine candidates for other flaviviruses such as Zika virus, where pregnant women are the target group for vaccination."

Dengue is an endemic problem in several countries including India. Check if you know enough about this deadly disease by taking this quiz.
Advertisement
<< New Insights into Amyotrophic Lateral Sclerosis (ALS)
New Tool to Predict Early ICU Readmission for Surgical Pati... >>

Dengue and malaria cases have registered a significant drop in Haryana in 2016 compared with 2015 and no deaths have been reported so far.

Public health communities in dengue-endemic countries now have additional means to achieve the WHO objectives for 50 percent reduction in mortality .

Calculate Ideal Weight for Infants Hearing Loss Calculator Find a Doctor Turmeric Powder - Health Benefits, Uses & Side Effects Nutam (400mg) (Piracetam) How to Reduce School Bag Weight - Simple Tips Noscaphene (Noscapine) Diaphragmatic Hernia The Essence of Yoga Blood Donation - Recipients
This site uses cookies to deliver our services.By using our site, you acknowledge that you have read and understand our Cookie Policy, Privacy Policy, and our Terms of Use  Ok, Got it. Close
×