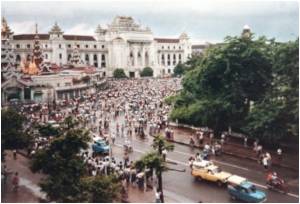 Myanmar's ancient capital has survived wars, earthquakes and centuries of tropical sun, but in recent years the spires of Bagan has faced a distinctly modern threat -- scaffolding and cement.

The temples, some of which are around 1,000 years old, are one of the country's most treasured religious sites and a top attraction for foreign tourists flocking to the country as it emerges from decades of military rule.

While many have largely withstood the ravages of man and nature, haphazard renovation work has also seen new temples built on the foundations of crumbling structures, and experts say they bear little resemblance to the originals.


"Several hundred monuments have been completely rebuilt. It has obviously damaged the historical landscape," architect Pierre Pichard, a former UNESCO consultant, told AFP.
Advertisement
"It is totally contrary to what is accepted internationally in terms of good practice."

Pichard helped restore the temples after a huge earthquake struck the region in central Myanmar in 1975, but was forced to leave the site in the early 1990s when the rulers effectively closed the country to the outside world.

After asking Buddhists for donations, the junta then started rebuilding the temples, many of which were just piles of bricks.

Around 2,000 have so far been renovated, many with hastily done stone and plaster work, using bright orange bricks and other modern materials.

A huge number of trees have also been planted across the vast plain dotted with pagodas and temples.

"One of the characteristics of Bagan in the past was to be able to see hundreds of monuments in the middle of fields, and now we see them less," said Pichard.

"These trees are an aberration in terms of the environment because the climate is very dry and they need to be watered during the dry season."

Today new building works have been halted, but some structures are still being renovated, and archaeologists have been allowed back into the country to oversee the work.

Experts warn that much of the damage cannot be reversed, and could threaten Bagan's chances of winning World Heritage status.

'Waiting for the next earthquake'

One engineer who worked at the site after the 1975 earthquake, but stopped when the foreign experts left, said a lot of the restoration work was done quickly and cheaply to maximise the profits of local building firms.

"People donated to get a close relationship to the generals," he told AFP on condition of anonymity.

"Most of the new reconstructions are by the road where they can be easily seen. Those in the centre have been badly reconstructed, as no one visits them."

"We are waiting for the next earthquake. The new ones will fall down as they used very poor mortar."

Over the centuries, the buildings have deteriorated in the tropical weather, been damaged by successive earthquakes and looted by light fingered visitors.

"These pagodas were built a long time ago, and the rain water has managed to get between the bricks and damage them, so we are filling up the holes," said U Kyain, who is overseeing restoration work on the roof of the Dhammayazika Pagoda.

In its heyday Bagan was one of the most important centres for learning in Asia, if not the world.

The Burmese kings and rulers built thousands of temples, more than 3,000 of which are still standing today.

The structures are mostly built from brick, and over the years gold leaf roofs have been added to some.

Renovations 'a tribute to Buddha'

Constructed in 1197 by King Narapatisithu, after he received four holy relics from the king of Sri Lanka, the Dhammayazika pagoda is one of the most impressive in the whole of Bagan, and survived largely unscathed in the 1975 earthquake.

Since that fateful July day, U Kyain has helped rebuild many of the temples.

"The people of the world might see the renovations as us destroying the original form of the ancient monuments. As a Buddhist in Myanmar, seeing these old piles of brick it is not graceful or respectful to Buddhism."

The temples, he added, are still in use by pilgrims who come to pray.

"The new generation of Buddhist people in Myanmar renovate and rebuilt the pagoda to show their respect to the old people who built these pagodas and to express their emotion to Lord Buddha."

The restoration work does not seem to put off visitors, who start arriving early each day as haze rises from the spires of thousands of temples against a backdrop of distant hills bathed in the morning sunlight.

More and more foreigners are coming every year, often passing the newly built structures to visit their more ancient neighbours.

And despite the controversial renovations, Bagan could still win World Heritage status one day, said Tim Curtis, head of the culture unit at UNESCO's office in Bangkok.

"Quite a bit of the restoration would not have been what we would have recommended," he told AFP.

But it was also important to recognise that Bagan -- which is on a tentative list to be considered for the coveted status -- is a living heritage site, he said.

"These temples are places of worship. They are not just heritage sites or archaeological sites -- they are living cultural expressions."

Source: AFP
Advertisement
<< One in Every 12 Minutes is Spent on Web Surfing: Study
Essential Autumn Foods to Gorge on >>

Medical Aid Abroad Sought By Myanmar's 'Tallest Man'
In a remote Myanmar village, "Big Zaw" has known he was different since a teenage growth spurt sent ...