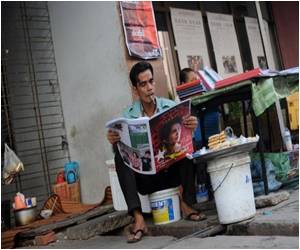 They call it "Old Man's Land." Ravaged by conflict and economic deprivation, Myanmar's southeast Mon state is a place bereft of its young, who have flooded overseas in search of work.

But with a reformist government now promoting peace and economic development in impoverished border areas, the region is now looking to its future -- and its lost youth.

The rural Mon community of Ywarthit is a place for the old and the very young. Locals say around 70 percent of households are missing the generation in between.


Many teenagers leave once they have finished school, crossing the border into Thailand to seek work in factories or as domestic helpers.

"There are not many people left in the village now. Only mothers and grandparents taking care of the grandchildren," Nyein Tin, whose five children all went to Thailand to look for jobs, told AFP.
Advertisement
She said she relies on their remittances, having given up work to look after five grandchildren.

"How would I live if they didn't send money?" the 60-year-old said.

Source: AFP
Advertisement
<< Among US Youths, No Significant Change Seen in Overall Smok...
Woman's Surgery May Not be Effective Over Long-Term >>

The World's Largest Annual Migration Begins in China
In China the world's largest annual migration began on Saturday with tens of thousands in the ......