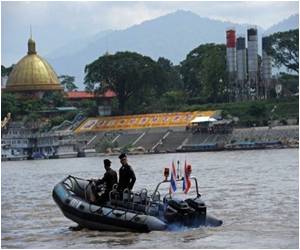 In Myanmar, proposals by radical Buddhist monks to criminalise inter-faith marriage face strong opposition from women's rights groups in a tussle over the nation's religious identity that has sparked international alarm.

Buddhist nationalists, feeding off the fear and uncertainty caused by successive waves of anti-Muslim violence, have issued fiery pronouncements that the very fabric of the country's main religion is under threat, casting a dark shadow over ongoing democratic reforms.

Myanmar's Forests on the Verge of Extinction

All that is left of the fearsome forest in Myanmar is the ashen strewn earth with the limbs of once-mighty trees.
Advertisement

The marriage law is one of four bills suggested by a hardline faction within the Buddhist clergy and put to the fledgling parliament by the president.


To "protect" Buddhism -- the religion of more than 80 percent of the population -- radical monks have urged boycotts of Muslim businesses, including of Qatari telecoms firm Ooredoo, despite its promise to bring much-needed affordable mobile access.

Myanmar has loaned some of its ancient treasures to be displayed in a landmark exhibition exploring the ancient kingdoms of Southeast Asia that opens in New York next week.
Advertisement
And they have warned that Buddhist women are at risk from Muslim men, a tactic "calibrated for emotional impact", said Nicholas Farrelly, a research fellow at the Australian National University.

"These calls help to generate a mood of crisis that radicalises those who would otherwise be relatively apathetic about other religions in Myanmar," he told AFP.

While the country is dominated by ethnic Bamar Buddhists, it has sizeable religious minorities thanks in part to the legacy of British colonial rule.

Christians make up around four percent of the population, and Muslims are thought to account for between four and 10 percent.

The commercial hub of Yangon is dominated by the glittering Shwedagon, a revered golden pagoda, but the city also boasts dozens of churches and mosques.

Conflict flared between Buddhists and Rohingya Muslims in western Myanmar's Rakhine state in 2012, leaving more than 200 people dead and 140,000 displaced.

The displaced were mainly Rohingya, who had already been subject to marriage restrictions and a "two-child policy" in some areas.

Anti-Muslim bloodshed spread to other parts of the country last year, unearthing deep-seated animosities as the nation emerges from totalitarian junta rule.

If enacted, Farrelly said the laws could receive "wide support", particularly in working-class and middle-class Buddhist areas "where angst about Muslim 'incursions' is high" at a time of huge transition in the country.

The proposed restrictions -- on marriage, religious conversion, polygamy and birth rate -- were put forward by a 200-strong group of monks called "Mabatha", or the Committee for the Protection of Nationality and Religion.

A draft of the conversion bill -- which would require anyone wanting to change religion to seek a slew of bureaucratic permissions -- has already been produced.

The bill "has no place in the 21st century", according to the US Commission on International Religious Freedom, which warned that together the proposals risk stoking violence and discrimination.

A leaflet from Mabatha claims the ills of inter-faith marriage range from rape, murder and forced conversion to "not saluting the Myanmar national flag".

It says men of minority faiths should be jailed for up to a decade if they marry Buddhist women without first converting.

"I really believe that this law can protect Myanmar Buddhist women," he told AFP, dismissing the group's critics as having "wrong views".

Human Rights Watch has said one version of the marriage bill requires men of another religion to seek permission in writing from his Buddhist bride's parents.

Nearly one hundred women's groups signed a statement last month criticising the proposals, saying they failed to acknowledge Buddhist women's ability to "think rationally and make decisions" about their own lives.

Many have since found themselves subjected to threats of violence through anonymous calls and messages.

US Ambassador Derek Mitchell has said these are "unconscionable and dangerous for the health of this nascent democracy".

May Sabe Phyu, of the Gender Equality Network, said the marriage plans would do little to stop abuses affecting women across communities in Myanmar -- from domestic violence, to sexual and conflict-related assaults.

"We believe that nationality and religion are not things that have to be protected by legal force," she told AFP.

She echoed the widely-held belief that the rise of Buddhist nationalism is being used as a political tool to wrong-foot Aung San Suu Kyi's opposition ahead of key 2015 elections.

The Nobel laureate, one of the few women in Myanmar's parliament, has spoken out against the inter-faith marriage proposals, but she has also disappointed activists for saying little to dampen religious intolerance.

Hate speech has proliferated online as strict junta-era controls relaxed under the quasi-civilian government that took power in 2011.

"I want to pull the hair and slap that kind of girl," said one commenter on a recent Facebook posting about a Buddhist woman allegedly abandoned by her Muslim husband.

Another said organisations opposing the inter-faith marriage law were "whores".

"Nationalists who say they want to protect the country and religion are very rude," said May Sabe Phyu, vowing to continue to speak out "bravely and freely" despite the threats.

A gay couple got married in a lavish public ceremony, decked up in matching traditional Myanmar clothes and garlanded in jasmine, claiming that this was the first of its kind in the nation.
Advertisement
<< Insomnia Symptoms Do Not Increase High Blood Pressure Risk
Vietnamese Women Trafficked to China as Brides >>

The granddaughter of Myanmar's last king lives poor and unrecognised by her neighbours in a modest Yangon apartment. It is a far cry from the power and riches of her ancestor.
Advertisement
News A-Z
A B C D E F G H I J K L M N O P Q R S T U V W X Y Z
What's New on Medindia

More News on:
How to Save your marriage Benefits of Meditation / Meditation Therapy Divorce: Pros and Cons Is Life Better Staying Single or Getting Married?