Myanmar's Forests on the Verge of Extinction 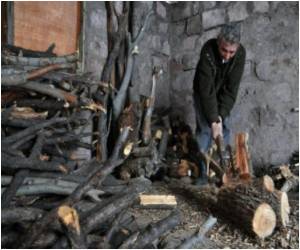 All that is left of the fearsome forest in Myanmar is the ashen strewn earth with the limbs of once-mighty trees.

"We would only dare enter in a big group. The forest was deep and had many wild animals. Now we cannot even find a tree's shadow to shelter under when we are tired," the 72-year-old told AFP.

At one point tigers were so common in the area that their bones were traded cheaply. Now they have vanished into memory.


Large swathes of the undulating landscape of the Bago mountains have been stripped bare by logging firms over recent years and the last remnants of wood are being burnt.
Advertisement
Locals say there are plans to replant the area with valuable teak trees -- though even if they do, these will take up to 80 years to reach maturity.

Logging in Myanmar exploded under the former junta, as the generals tossed aside sustainable forestry practices in their thirst to cash in on vast natural resources.

Experts say an insatiable world appetite for precious hardwoods is threatening rare species and helping to drive deforestation in one of the last major areas of tropical forest in Asia.

The country lost almost 20 percent of its forest cover between 1990 and 2010, according to the UN Food and Agriculture Organisation.

Widespread degradation of the most densely wooded areas means that so-called "closed forest" more than halved in size, from 30.9 million to 13.4 million hectares.

A quasi-civilian government that replaced outright military rule in 2011 has sought to stem the flood of timber from the country with a ban on the export of raw logs which took effect on April 1.

"Our ban will be very effective. There will be cutting, distribution and finishing of timber products locally, so that we can also increase employment opportunities," said the director general of the Ministry of Environmental Conservation and Forestry, Tin Tun.

Wildlife group WWF said the biggest driver of forest loss has been large-scale conversion for agriculture, often after woodland is degraded by logging or the collection of wood for fuel.

It welcomed the export ban and said the government has also slashed quotas for teak and other hardwoods by 60 percent and 50 percent respectively for the coming fiscal year compared to 2012/13.

"But given the high volume of illegal logging and exports in Myanmar, it will take a long time before we see how effective the ban will be," said WWF's Myanmar conservation programme manager Michelle Owen.

In mountainous northern Myanmar close to the Chinese border, logging roads score the landscape as firms drive ever deeper into pristine forests.

There are thought to be barely 300 of the flat-faced primates left in the dense forests of Kachin state at the eastern tip of the Himalayas.

Chinese workers have flooded into the area, fuelling demand for the monkeys to be hunted for food and traditional medicine, Momberg said.

Other species also inhabit the threatened forests, including the red panda, Blyth's Tragopan pheasant and the Takin, known as a goat antelope.

"A complete ecosystem is being destroyed by this radical logging," Momberg said.

He said the loggers are supplying rare woods for a furniture industry in Tengchong, in China's Yunnan province, using maple trees to make delicate carved tables and protected Taiwania conifers for "luxurious coffins".

Flora and Fauna is setting up the approximately 250,000 hectare Imawbum national park with Myanmar's forestry department and have created hunting-free zones with the support of local villages.

China recorded importing 10 million cubic meters of round logs from its impoverished neighbour between 2000 and 2013 -- almost twice Myanmar's officially registered global export trade of 6.4 million cubic meters for the period, according to the Environmental Investigation Agency (EIA) campaign group.

Some 84 percent of logs imported into China went by land, despite longstanding rules barring exports from any other route than through Myanmar?s Yangon and Dawei ports, making them "legally questionable at best and downright illegal at worst," the EIA said.

In a recent report based on Myanmar forestry documents and global trade data, the EIA said the country was believed to have exported up to 3.5 times more logs than the volumes officially recorded between 2000 and 2014.

"Such a gap is indicative of widespread criminality and corruption in Myanmar's timber sector," the report said, estimating this vast shadow industry was worth up to $5.7 billion.

And despite the export ban, trucks loaded with logs were seen around the Yangon port after April 1, while more than 60 tonnes of illegal timber were recently found in trucks disguised as anti-logging festival floats.

Demand is driven from all over the world, with timber "laundered" through ports in Malaysia and Singapore and the price of prized logs such as rosewood shooting up.

Source: AFP
Advertisement
<< Prices of Lime Skyrocket in the US
Study Explores How Frequent Snacking in Kids Relates to Ener... >>