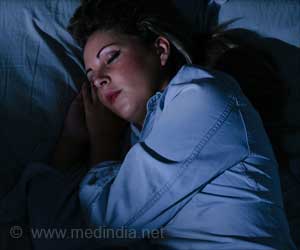 Narcolepsy (excessive daytime sleepiness), cataplexy (sudden loss of muscle tone), and rapid eye movement (REM) sleep behavior disorder are serious sleep-related disorders. The researchers have found neurons in the brain that link all three disorders and could provide a target for treatments.

The research led by Professor Takeshi Sakurai at the University of Tsukuba is published in the Journal of Neuroscience.

Sleep is the blissful state that rejuvenates our mind and body everyday and any deprivation often leads to a disorder that can affect our health
Advertisement
‘Rapid eye movement sleep disorder, narcolepsy, and cataplexy can be treated by suppressing glycinergic neurons in the ventral medial medulla thereby blocking the SLD-to-ventral medial medulla and reducing cataplexy episodes.’
Read More..

Most of the dreams occur during REM sleep in which the eyes move back and forth, but our bodies remain still. This near-paralysis of muscles while dreaming is called REM-atonia. In patients with REM sleep behavior disorder, REM-atonia is absent due to which the muscles move around often leading to stand up and jump, yell, or punch. Researchers have found neurons in the brain that normally prevent this type of behavior during REM sleep.


The team identified a specific group of neurons as likely candidates in mice. The cells located in the ventral medial medulla receive input from an area called the sublaterodorsal tegmental nucleus, or SLD.

The comfort of modern life comes at the cost of restful sleep! "Laugh and the world laughs with you, snore and you sleep alone-Anthony Burgess" Scientifically it is proven that a good night's sleep is imperative for maintaining a balance between the physical, emotional and behavioral well-being of a person.
Advertisement
Sakurai said, "The anatomy of the neurons we found matched what we know. They were connected to neurons that control voluntary movements, but not those that control muscles in the eyes or internal organs. Importantly, they were inhibitory, meaning that they can prevent muscle movement when active."

On blocking the input to these neurons, the mice began to move during their sleep similar to someone with REM sleep behavior disorder.

By triggering cataplexic attacks in mouse model of narcolepsy by chocolate, the researchers tested their hypothesis.

Sakurai said, "We found that silencing the SLD-to-ventral medial medulla reduced the number of cataplexic bouts. The glycinergic neurons we have identified in the ventral medial medulla could be a good target for drug therapies for people with narcolepsy, cataplexy, or REM sleep behavior disorder. Future studies will have to examine how emotions, which are known to trigger cataplexy, can affect these neurons."

The glycinergic neurons that link all the three disorders can serve as a possible target for the treatment of sleep disorders.

How many times have you stayed awake in the dead of the night counting sheep? If it is fairly often then you could be suffering from a sleep disorder!
Advertisement
<< New Therapy To Treat Advanced Form Of Parkinsons Disease
Odisha Reports Two Serious Adverse Events Following Immunisa... >>