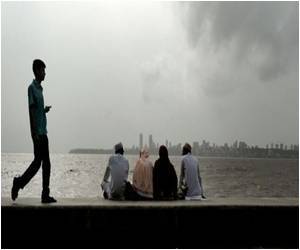 A report reveals that India is among the 'extreme risk' countries where economic impacts of climate change will be most felt by 2025.

In its sixth annual Climate Change Vulnerability Index, risk consultancy firm Maplecroft revealed the countries most likely to suffer from the effects of warming climates by 2025.

The report revealed that Bangladesh, Guinea-Bissau and Sierra Leone have the most 'extreme' risk rating.


Of cities around the world, Dhaka, the capital of Bangladesh, and the Indian metropolis of Mumbai are the most at risk of being impacted by climate change, the Huffington Post reports.
Advertisement
To come to the conclusion, researchers evaluated 193 countries on three factors: the capacity of nations to combat the effects of climate change, exposure to extreme weather events and sensitivity of populations to this exposure in areas such as health and agricultural dependence.

Maplecroft then assigned a risk level of 'extreme', 'high', 'medium' or 'low', along with a numeric ranking to each country.

Despite its air pollution problems, China is not considered to be one of the nations at extreme risk.

However, the Asian country was assigned a risk rating of "high", with 61 ranking among the nearly 200 countries.

On the opposite end of the index, the northern European nations of Ireland, Norway and Iceland rounded out the bottom of the list.

The U.S. ranked 158 among the 193 countries evaluated in Maplecroft's study.

Mumbai Teenager Leaves Red-Light Zone for US Degree
Stories of resilience are very common in Mumbai. One such story has come to light recently....

Mumbai to Host Pharma Convention from April 24
An official revealed that the Pharmaceuticals Export Promotion Council of India (Pharmexcil) will .....