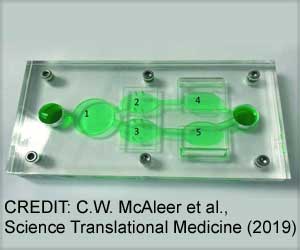 A new multiorgan-on-a-chip system that can accurately capture the toxic effects of chemotherapies has been created by Christopher McAleer and colleagues.

The technology could help scientists measure both the effectiveness and potential side effects of existing and new drugs faster and more accurately compared to standard preclinical models. Drug candidates tested using animal models have a high clinical failure rate, and safety studies based on individual human cells can miss toxicity in larger organ systems such as the liver and heart. As a result, candidates with an initially promising safety profile can perform poorly in clinical trials due to unanticipated and damaging side effects.
Advertisement
‘New body-on-a-chip model reliably evaluates both on- and off-target effects of chemotherapies on multiple organs simultaneously.’

Their system contains five chambers that can house different populations of human cancer and organ cells, some of which are grown on electrical modules, in a recirculating medium that mimics blood circulation. Importantly, the system can be easily and quickly adapted by inserting new chips in different compartments, allowing for flexible testing of different organ systems.


Experiments revealed the chemotherapy diclofenac exerted toxic effects on liver cells (reducing liver viability by 30%) in a system representing bone marrow cancer. In a different configuration, the chemotherapy tamoxifen affected the function of heart cells and was more effective against drug-resistant vulva cancer when combined with the blood pressure drug verapamil.

In addition to its potential uses in drug testing, the chip model could find applications in the design of personalized therapies by integrating patient-derived cells, the authors say.

Less Chemotherapy Better for Older Patients With Some Advanced Cancers: Study
Less chemotherapy is as effective at controlling disease for elderly or frail patients with ......

Male Breast Cancer
Most cases of male breast cancer are diagnosed between the ages of 60 and 70 years. Treatment of mal...