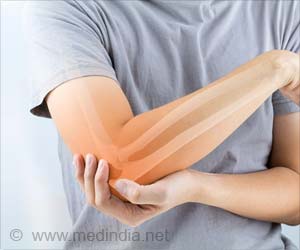 In postmenopausal women, postural sway was found to be an independent risk factor for bone fractures, according to a new study from the University of Eastern Finland and Kuopio University Hospital.


"Our aim was to investigate the association between high postural sway and fractures. In addition, we wanted to study the combined effect of high postural sway and low bone mineral density on fracture risk," says Early Stage Researcher Sarang Qazi, the first author of the new study.
Advertisement
The study was based on the OSTPRE (Kuopio Osteoporosis Risk Factor and Prevention Study) cohort which was initiated in 1989 in order to study bone mineral loss, falls and fractures in postmenopausal women. The cohort consisted of 14,220 peri- and postmenopausal women living in Kuopio, in the eastern part of Finland. Postural sway was measured in 1,568 women from the cohort during 1994-97. The women were followed up for a period of 15 years. At the end of the follow-up period, fracture data were collected through study questionnaires and hospital records.

The study introduces postural sway as a new, independent fracture risk factor. The researchers point out that further research is needed in order to incorporate postural sway into a fracture risk estimation tool. This will improve current methods and help in the early identification of the elderly who are at a greater risk of having a fracture so that required interventions can be carried out in time.

Clavicle Fracture
A clavicle fracture is a fracture of the collarbone that commonly occurs due to accidents or falls....

Top 10 Tips to Increase Bone Strength
Find out how to increase bone strength and lower your risk of suffering from degenerative bone ......

Too Much Vitamin A May Increase Bone Fracture Risk
Excessive vitamin A consumption may reduce bone thickness and increase the risk of bone fractures, ....

Screening for Osteoporosis
The risk of suffering from osteoporotic fractures is 30-50% in women and 15 to 30% in men. Osteoporo...

Tibia (Shinbone) Shaft Fractures
A tibial shaft fracture is an injury that occurs to the tibia, which is one of the long bones of the...